‘No deal’ is not on many people’s Christmas list but, given cheap valuations for both equities and sterling, it may not be quite as disastrous for investors as some have suggested.

As negotiations between the EU and UK drag on, a ‘no deal’ Brexit (trading on World Trade Organisation terms) once the transition period ends on 31 December is still a possibility. In spite of the Government’s reassurances that this outcome would cause minimal disruption, businesses and investors - fresh from the savage economic impact of COVID-19 - are understandably nervous. Perhaps a no deal Brexit should not be feared as much as the popular press would have you believe.

It is unclear whether the UK economy is prepared for a potential no deal Brexit since the referendum in 2016. However, currency and financial markets have adjusted somewhat. Sterling has barely recovered any ground from its lows in the wake of the Brexit vote. On conventional measures of purchasing power parity, sterling looks undervalued and therefore less vulnerable to a sell-off. Other central banks are pursuing similarly aggressive monetary easing policies, so there is no pick-up in yield for buying, say, US dollars, as there was in 2016 when the Federal Reserve was raising rates. Sterling appears to reflect much of the negative news.

It is a similar situation with UK equities, which have significantly underperformed their international peers since 2016. They consequently look undervalued on almost any metric – price to earnings, price to book or price to dividend ratio. Combining these metrics as a simple average, the UK market is now 30% cheaper (relative to the world ex-UK) than it was at the time of the 2016 referendum (chart)7. This is partly because of its weighting to ‘value’ areas at a time when investors have been more focused on ‘growth’ equities but it is still the cheapest it has ever been. Even against a backdrop of quasi-lockdowns and no deal Brexit fears, it is telling that the MSCI UK benchmark gained 13.1% in November, its biggest rally in 30 years8. This suggests that much of the negative news associated with the UK has probably been discounted. 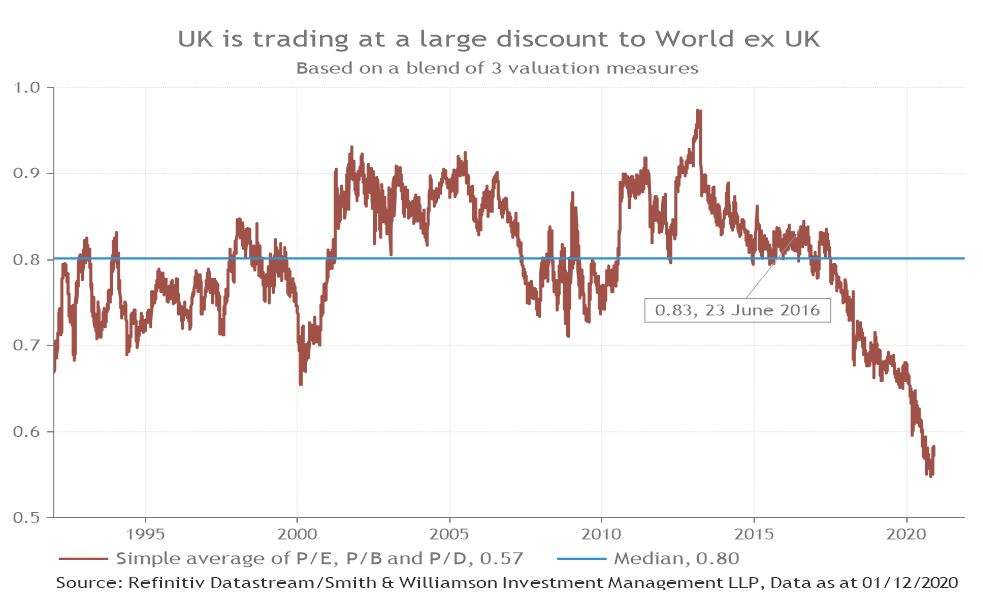 Of course, a no deal isn’t yet an inevitability. It is clear that amid his crowded inbox, US President-elect Biden is unlikely to prioritise a trade deal with the UK. He has expressed concern that the UK might compromise the Good Friday Agreement in the course of a no deal. Falling out with the EU is dangerous enough but falling out with the US at the same time – with a pandemic on – seems like a kamikaze approach. This may see British negotiators work a little harder to get a trade deal, to the extent that Morgan Stanley recently put the likelihood of the UK leaving on WTO terms at just 20%9.

These are precarious times for the UK but its difficulties are reflected in the price of its currency and stock market, which look historically cheap. ‘No deal’ is not on many people’s Christmas list but, given cheap valuations for both equities and sterling, it may not be quite as disastrous for investors as some have suggested.

Return to the Brexit hub

Risk warning
Investment does involve risk. The value of investments and the income from them can go down as well as up. The investor may not receive back, in total, the original amount invested. Past performance is not a guide to future performance. Rates of tax are those prevailing at the time and are subject to change without notice. Clients should always seek appropriate advice from their financial adviser before committing funds for investment. When investments are made in overseas securities, movements in exchange rates may have an effect on the value of that investment. The effect may be favourable or unfavourable.