Business is booming, despite Brexit uncertainty, according to entrepreneurs and scale-up leaders. Nearly 80% of respondents are planning for growth over the next twelve months, despite the looming March deadline.

81% of our respondents say that they weren’t affected by the Article 50 uncertainty, demonstrating the ongoing resilience, and confidence, of the UK entrepreneur.
Nick Travis

Increasingly, smaller businesses are now international and so have income and expenditure in several currencies.

Are you planning for growth in the next 12 months? 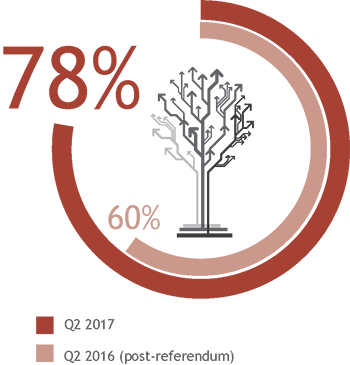 It was feared that investment would begin to dry up as the market declined. However, while business owners and investors may be slightly less confident they are still, by and large, eager to see what the future will bring. The UK offers an ideal situation to begin a business and scale a business:

GMT allows business to trade and communicate easily across the world
The rule of law remains paramount
There are a number of tax efficient savings to assist in growing a business
There is a developed professional sector to support a business
There is access to a huge supply of technically proficient individuals
All the above factors, which make the UK a great place to start a business, also make it ideal for businesses seeking investment.

The other, less heralded, issue with leaving the EU was its potential tarnishing of Britain as a place to do business - and the injection of confidence to other capital cities who may find themselves more able to compete with London.

Paris has recently launched Station F, a centre dedicated to start-ups, Berlin is looking to attract finance and a host of other European cities now seek to interest the highly-skilled workforce that is a requirement for all scale-up businesses.

However, what has become apparent is that few of these cities lack the rounded appeal the UK offers.

The social aspects of the UK, such as schooling, culture, law, among others, are still ahead of its European counterparts - while the infrastructure available to those starting and scaling-up in the UK remains second to none.

Indeed our respondent’s confidence in their own prospects over the next year is only likely to increase.

The social aspects of the UK, such as schooling, culture, law, among others, are still ahead of its European counterparts - while the infrastructure available to those starting and scaling-up in the UK remains second to none. Indeed our respondent’s confidence in their own prospects over the next year is only likely to increase.
Nick Travis

The UK scale-up market is flourishing, partly due to the external finance available to many within the sector. From angel investors to private equity, there are advantages in getting scale-up investment from the UK.

The number of private equity deals has been steadily increasing in recent years. Arguably, if Brexit was an issue in the UK market then businesses looking to raise external finance would find it a lot harder than they are currently.

There have been several Series A to C investments (the different rounds of investment that a business goes through) into scale-up companies in the UK in recent months. As these represent a confidence in a company’s long term growth, it is hard to argue that investment is shying away from backing the UK as a place to grow a business.

It is generally sensible for an entrepreneur to at least consider “de-risking” their personal position by taking some cash out of a business as part of a private equity deal.

This allows them to begin solidifying their financial position while still having a significant proportion of their work personal capital aligned with the success of the business.

A few years ago, the trend was for an entrepreneur to sell the business entirely and start again. However, following the course of fast-growth businesses in the US, we’re now seeing a noticeable shift to individuals remaining committed to scaling-up their business by either retaining senior positions or large equity stakes.

The battle for the right talent in legal services

In our 22nd Annual Law Firm Survey, we asked the 109 managing partners and other senior management figures from UK based law firms ‘what is the biggest challenge for your firm over the next two to three years’.

A well thought-out investment policy is essential to achieving your charity’s goals and demonstrating that Trustees have fulfilled their duty of care.