If investors were already worried about China, the situation at Evergrande is likely to inflame their concerns. Given that Evergrande is China’s second largest property developer by sales, a potential default has been billed as China’s ‘Lehman Moment’. The group has accumulated around $300bn in debt and has teetered on the edge of bankruptcy for years1. The company itself has said it is at risk if its efforts to raise cash fall short.

Breaking down Evergrande’s total liabilities the bulk accrue domestically in China through loans made by Chinese banks, prospective homebuyer deposits, money invested in wealth management products and supplier invoices. Only $20bn of Evergrande’s debt is in offshore bonds and is tiny in relation to the size of global capital markets2. Nevertheless, given that September is the 13-year anniversary of the collapse of Lehman Brothers, it is perhaps unsurprising that comparisons are being made. Like Lehman, Evergrande relied on amassing vast debts to run its business. Evergrande has been poorly run and involved itself in a smorgasbord of ill-fitting activities, from mineral water to football. The problem is not necessarily that Evergrande fails, but rather the issue is whether it leads to wider problems in China and spreads to the rest of the world.

So how resilient is China’s economy to a default by Evergrande? On balance, we see six reasons to believe that China is robust in the face of a Evergrande debt default, as it is more likely an idiosyncratic risk, rather than a systemic problem like the Lehman bankruptcy turned out to be.

First, Evergrande’s indebtedness stands out within China’s property sector at the extreme end of the leverage spectrum. Evergrande’s net debt/equity is 118%, far higher than peers Country Garden (51%) and China Vanke (30%), the first and third largest property firms by sales revenues3. In terms of cash to short-term debt, Evergrande stands at 36%, well below Country Garden on 193% and China Vanke on 214%4. On these metrics, it is perhaps unsurprising that Evergrande appears vulnerable!

So far there is little sign of financial contagion spreading from Evergrande to other large Chinese property companies. As expected, the bond prices of Evergrande have collapsed, but bond prices of Country Garden and Vanke have remained resilient to reflect their healthier financial fundamentals. 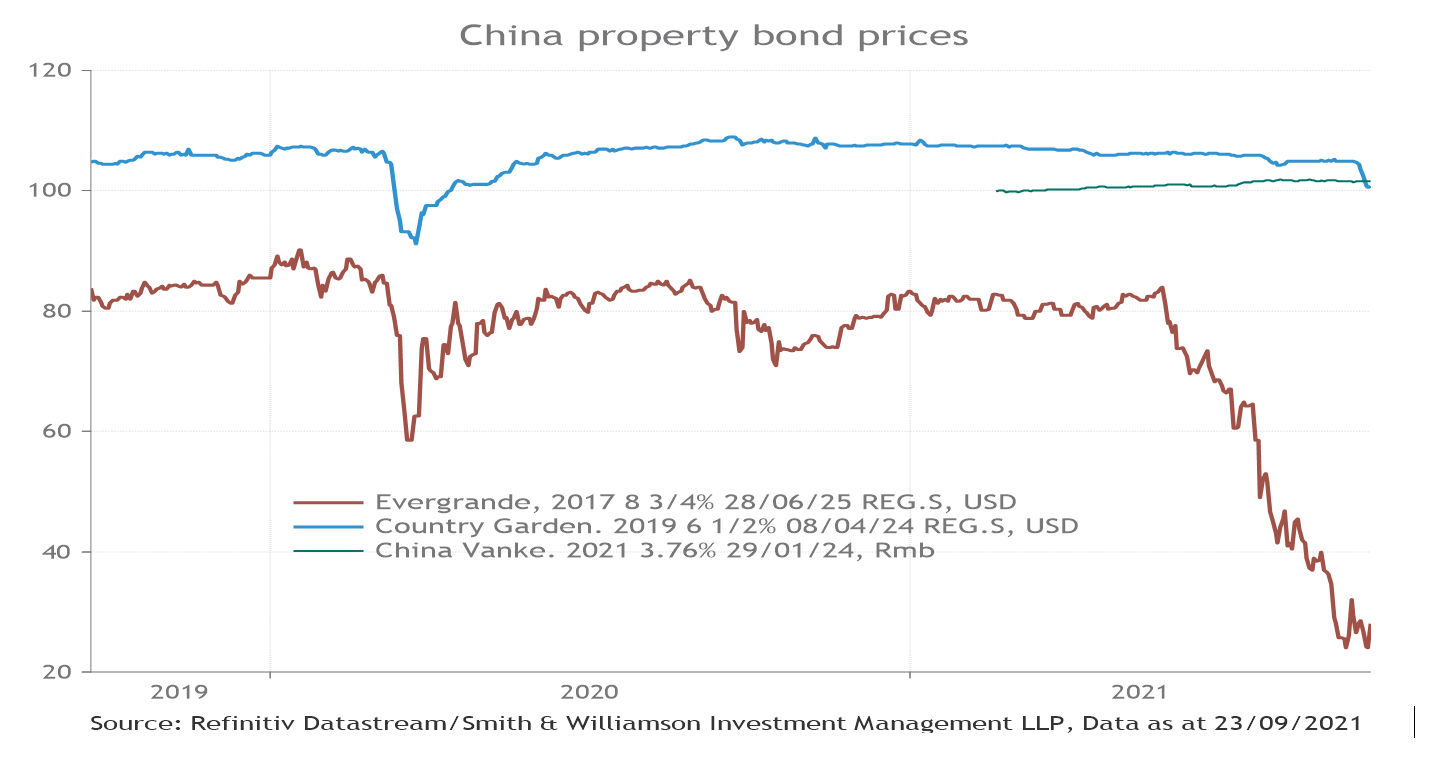 Second, China’s policymakers deliberately moved in August 2020 to reduce leverage in the property sector by linking access to credit to indebtedness. The aim of this pre-emptive measure is to lower the use of speculative credit in the property sector and is part of President Xi’s “common prosperity” drive to narrow wealth inequality by making housing more affordable. It would seem likely that regulators would have anticipated some stress amongst the most indebted property developers from this policy move. Historically, China has been successful at tackling highly indebted companies like Anbang Insurance Group by exerting more government control without causing systemic ripples in the financial system.

Third, there does not seem to be a trigger event for China to experience a Lehman-type moment. Previous emerging market debt crises have usually been prompted by a trigger event: either an inability to pay back foreign lenders or a liquidity crisis in a country’s financial system (such as the Global Financial Crisis). China does not appear vulnerable to either of these triggers. Its FX reserves of $3.2trn easily cover its foreign debt of $2.5trn, while China bank deposits cover 120% of loans5. In contrast, during the subprime crisis in 2008, nearly 75% of US bank credit was funded by wholesale markets, rather than bank deposits6. This left the US banking system highly vulnerable when house prices, which backed the collateral value of mortgages, began to fall. When borrowers couldn’t repay their loans, it started a fire sale in assets to meet creditors’ demands.

The crucial point here is that it was not the bad loans that precipitated events, but the banks’ lack of liquid funds to prevent large, forced asset sales, often at prices far below their intrinsic value. If banks are liquid, then they can be patient in calling in loans and allow asset prices to adjust more slowly to avert a crisis. China’s banks do not face the same liquidity issues as US financial companies did thirteen years ago.

Fourth, China has taken steps to improve credit efficiency. As a rule of thumb, if credit efficiency improves, it means more GDP growth is being created with each unit of debt. Importantly, China has shown a willingness to implement necessary structural reforms – on the financial sectors, on state-owned enterprises and on government spending. There are signs these policies are bearing fruit. In the second quarter of 2021, it took Rmb2 of credit to generate Rmb1 of GDP, a stark difference from Rmb10.1 in the third quarter of 20207. Less use of credit to generate growth should lower systemic risk in China’s financial system in the years ahead. 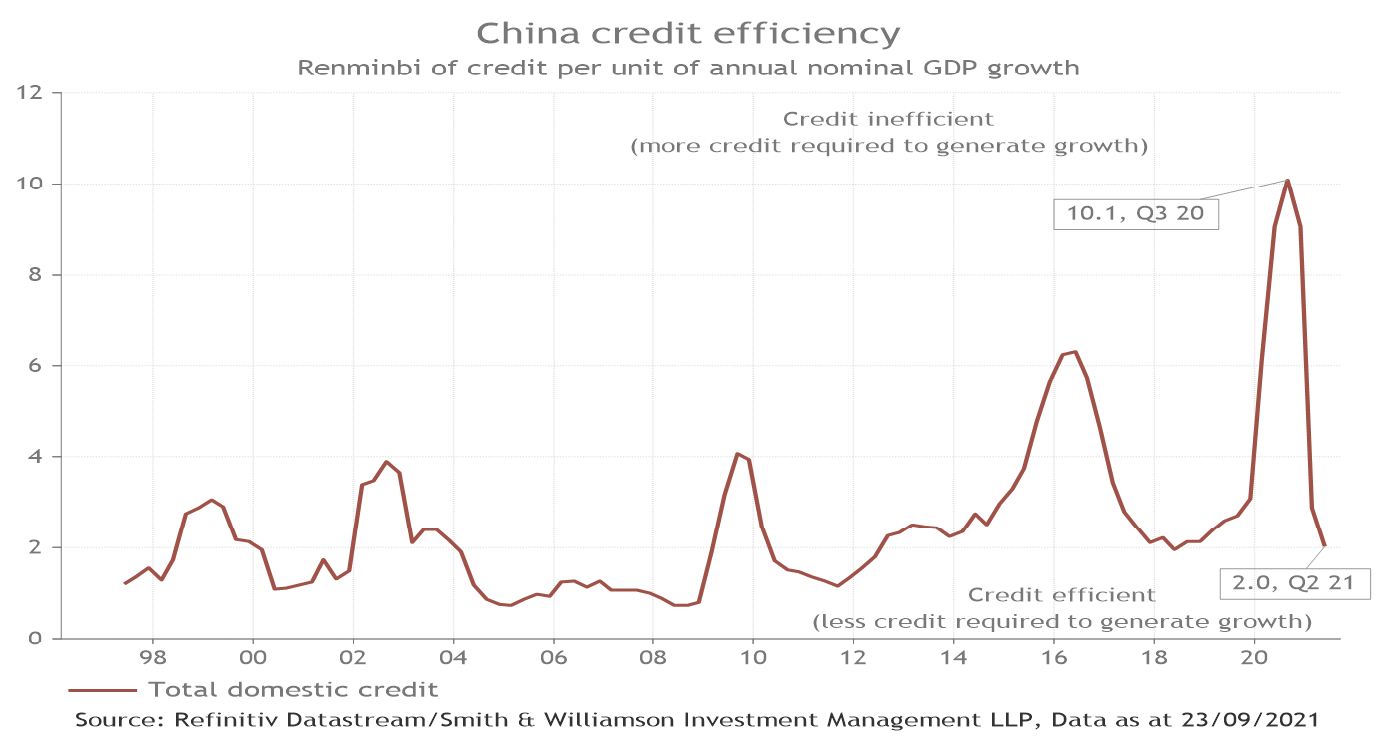 Fifth, corporate China has never been more profitable and continues to benefit from reforms to separate government function from enterprise management. These reforms are paying dividends. Net profit margins for Chinese industrials are at a multi-decade high of 7% so far this year, a stark difference to just 0.2% in 1998, before material State-Owned Enterprise reforms were implemented. Increased firm profitability should support the economy, and by extension, improve the resilience of the financial system8. 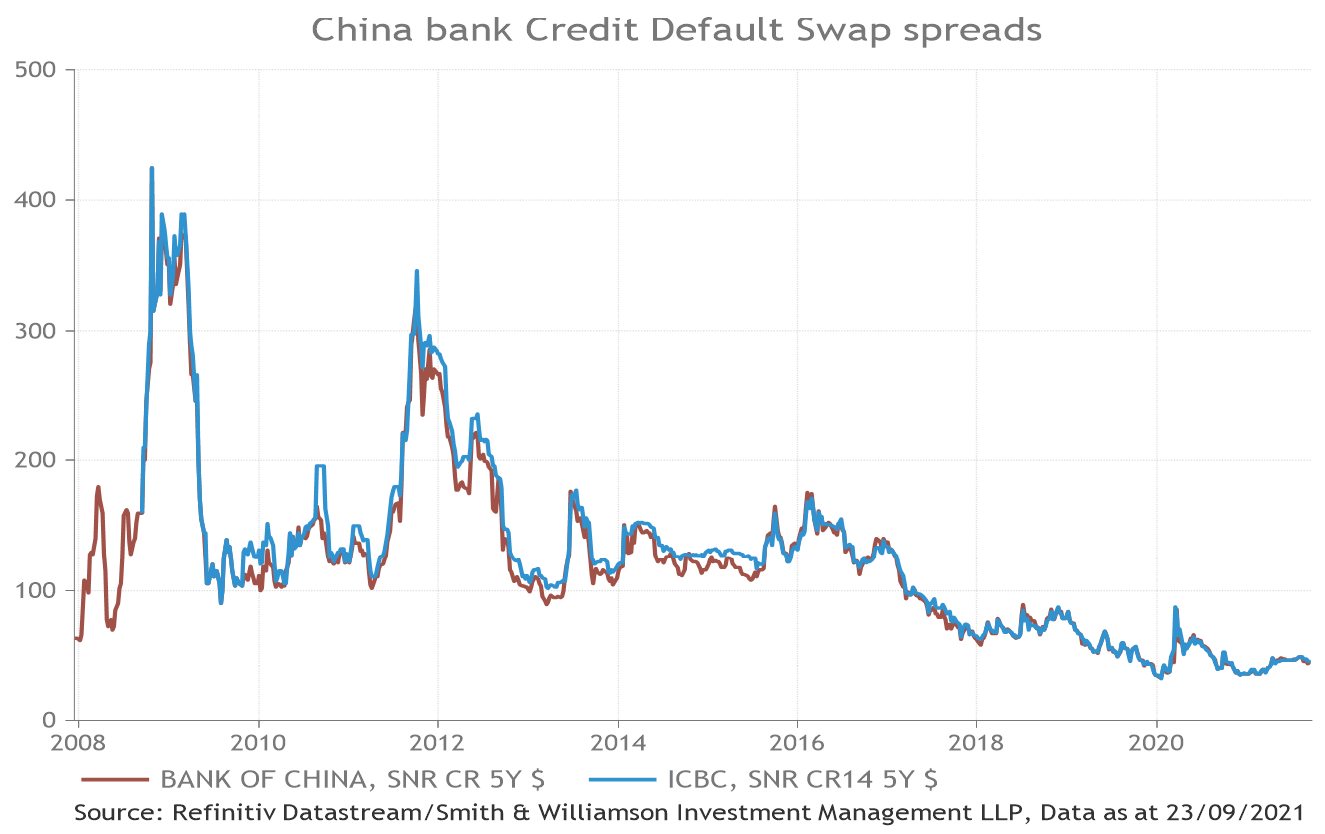 Considering these six factors, we do not believe that a potential bankruptcy of Evergrande is the start of a systemic wave that leads to a dangerous downward economic spiral in China that spreads globally. Of course, there remain concerns about the Chinese economy. Declining freight traffic and easing consumption points to slowing growth.

While Covid-19 remains relatively well-contained across the country, sporadic outbreaks have knocked consumer confidence in some areas. The housing sector does look difficult, but sales transactions haven’t declined, which makes us think that it can weather these recent problems. As with elsewhere across the world, supply chain disruptions are also affecting the corporate sector and consumption. Credit has tightened across the economy, which may also act to hold back growth. However, China’s central bank has begun to loosen policy through a reserve requirement cut in July that allows banks to lend out more. On balance, recent slower growth in China is an economic risk and is unlikely to lead to a sharp downturn in global equities.

In short, we consider that the financial conditions show Evergrande as an idiosyncratic risk and not a systemic risk. While the news flow from Evergrande may contribute to elevated market volatility in the short term, we don’t believe this is China’s Lehman moment.

Investment does involve risk. The value of investments and the income from them can go down as well as up. The investor may not receive back, in total, the original amount invested. Past performance is not a guide to future performance. Rates of tax are those prevailing at the time and are subject to change without notice. Clients should always seek appropriate advice from their financial adviser before committing funds for investment. When investments are made in overseas securities, movements in exchange rates may have an effect on the value of that investment. The effect may be favourable or unfavourable.

2020 has been a bizarre and unreal experience. However, despite this turbulence, the technology industry has shown incredible resilience while driving innovation. Other industries have suffered from the impacts of the coronavirus (COVID-19) pandemic but businesses in the technology sector were not as heavily impacted.

It was widely known that the technology industry would be significantly affected by the revenue recognition standards, IFRS 15 and ASC 606: Revenue from contracts with customers (2018). Whilst the standards provide significantly more guidance over the treatment of revenue, the application of these accounting standards is still proving to be a real challenge.