Chinese authorities acted to inject further stimulus into its slowing economy. The People’s Bank of China (PBoC) took a two-pronged approach by cutting 25 bps from the one-year lending and deposit rates to 4.35% and 1.5% respectively, both fresh all-time lows, and also reducing the reserve requirement ratio by 50 bps to 17.5%. At the same time the authorities essentially completed their interest rate liberalisation – on the surface at least – by removing all remaining caps on deposit rates. These latest moves come hot on the heels of the the reported slowdown in GDP to 6.9% year on year in Q3 and disappointing industrial production and fixed asset investment figures.

The ECB president dropped a strong hint of yet more stimulus from the Central bank in another display of trying to manage market expectations and influence markets through rhetoric. Despite not making any changes, President Mario Draghi talked about concerns emanating from outside the Eurozone, such as China’s slowdown, and highlighted how monetary policy would need to be “re-examined” at the December meeting, when the latest forecasts would be released. As well as reiterating the Central bank’s flexibility and its position of being “willing and able” to act, Mr Draghi also reported that they were looking at a “full menu” of options, which included lowering interest rates further into negative territory. With a minority of those at the meeting reportedly in favour of action this time around, expectations are building for some fairly significant policy announcements at the next meeting in December, which will be shortly before the US Federal Reserve’s equivalent meeting.

Markets continued to marginally favour risk positions, as equity indices ticked up, whilst sovereign debt softened in the US and UK – though further QE expectations had the opposite effect on debt in Europe and Japan. 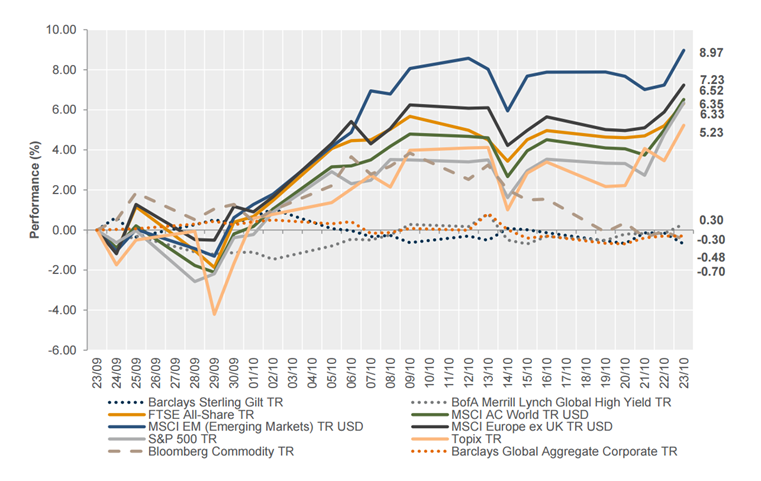 Highlights this week are likely to be the third quarter GDP figures from the UK and the US, as well as the US FOMC meeting – although no one is expecting any movement this time, being as it comes without a press conference. There is also a range of other mid-level economic numbers from across the globe which could help add some colour to the global economic picture.

Monday: Germany kicks off the week with its IFO business surveys, which are expected to continue to show that, whilst conditions are now doing well, the outlook is more challenged. This is followed by UK business optimism and then the US provides new home sales in the afternoon.

Tuesday: It’s the UK’s turn to report Q3 GDP, with forecasts for no change at 2.4% year-on-year growth (0.6% quarter on quarter). Ahead of this, the Eurozone will report on loan growth and in the afternoon US durable goods orders could provide some interest. They are released with house price, consumer confidence and services PMI data.

Wednesday: The US Federal Reserve FOMC meeting concludes with the release of the latest decision and statement – no press conference is scheduled, so any action would be a real surprise (though it’s not that hard to call an impromptu press briefing if you’re the Fed). Later in the evening, Japan reports on industrial production.

Thursday: The big release will be the first estimate of US Q3 GDP, with expectations for a relatively modest rate of 1.7% annualised quarter-on-quarter growth. This would be a marked slowdown from the upwardly revised second quarter figure of 3.9%, but forecasts suggests a Q3 slowdown will be followed by a re-acceleration in Q4. Ahead of this, there are economic survey results from Europe, whilst after the US figures, pending home sales are out and then in the evening Japanese inflation and unemployment are reported.

Friday: A fairly busy close to the week as well. The morning gives us UK consumer confidence and German retail sales first thing, followed by Eurozone inflation and unemployment data. In the afternoon the US reports on personal spending and the Chicago PMI reading, which is expected to remain in contraction.