As a result, the prospect of global oversupply has sent the oil price into freefall, with Brent crude now trading at $36/bl – levels last seen in 2004. Some analysts are predicting that Brent could reach $20/bl as the market digests record short positions, capitulation trades from ETFs etc. and even concerns that the limits to global storage capacity could be reached this year. The greatest risk to OPEC

The problem remains that the impact of lower prices upon the global supply of oil is taking much longer than Saudi Arabia (and therefore OPEC) anticipated. Given its clear divisions, OPEC hasn’t got the discipline to pursue a strategy of cutting output and even if it did, there are plenty of suppliers (both within OPEC and outside it) who would gladly fill the gap it would create in the market. Having crossed the financial point of no return, each supplier is now focussing upon market share and maximising its dwindling revenue.

Herein lies the greatest risk to OPEC. Its total annual oil revenue was estimated at $1.2 trillion in 2012; it will fall to $400 billion per annum in current market conditions. Prevailing prices are way below members’ financial breakeven levels, which range from $107/bl for Iran to $49/bl for Kuwait, via $87/bl for Saudi Arabia. This is placing considerable strains on their collective budgets, leading to unpopular spending cuts, credit rating downgrades and weak currencies – or, in the case of Saudi Arabia, pressure to realign the riyal relative to the dollar. At the moment, most OPEC countries have low debts and significant accumulated reserves, which should give them the capacity to weather the storm at least over the foreseeable future. Given the volatile nature of Middle East politics (and its potential global implications), the risks implied by OPEC’s increasingly dire straits should not, however, be underestimated.

What’s happening to oil in the US?

With OPEC in disarray, attention continues to focus upon non-OPEC supply and the US in particular. Here, the issue is that despite growing signs of supply constraints (including a collapse in the rig count to 524 from 1609 late last year), US output has only fallen modestly – to 9.4m b/d – and remains some 70% higher than it was in 2011, when the shale revolution moved into gear. 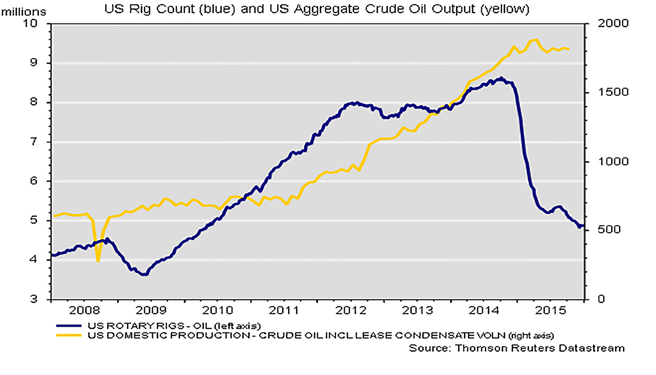 US weekly field production data is consistent with the International Energy Agency’s proprietary model, which suggests that supply will fall by over 650/- b/d in 2016. If this materialised, it could set the scene for a tighter market in 2017, given that non-OPEC output has stalled and demand is currently increasing by 1.8m b/d on an annual basis. In the meantime, the selling forward of output at more favourable prices, ongoing cost savings and a lenient funding regime are testing the bears’ patience, a situation not helped by the significant delays in the production of accurate data – the latest total US output figure currently available is October.

Of these elements, the one showing the most obvious stress at present is funding. The banks again seemed to have granted the shale industry a stay of execution at their most recent semi-annual lending review (in October), but the US High Yield market is not proving so tolerant. With average energy junk bond yields now at 15% and approaching the highs reached in 2008, the markets are effectively closed to all but the most solvent operators. However, of a total $210 billion of such bonds in issue, only some $5 billion matures in 2016, whilst over half of shale bond issuers are believed to have enough cash on their balance sheets to finance next year’s debt. Hence, most operators are also tenaciously hanging on, hoping for some blue sky to appear on the horizon before they’re overwhelmed by their debts.

Taking a longer-term view, the oil market looks set to become even more crowded in 2016. Iran is anticipating the ending of nuclear sanctions, which would immediately release another 0.5m b/d onto mainstream markets, with the prospect of a further 0.5m b/d by approximately the end of next year. In addition, the spending bill now making its way through Capitol Hill includes a lifting of the ban on the export of crude oil from the US, which has been in place since the 1970s. The immediate impact is likely to be limited, given current price levels, but in the longer term, it implies a further cap on oil’s recovery potential.

Plentiful supply and record levels of inventory suggest that analysts’ forecasts of $20/bl may yet prove to be correct, in the near term. What is certainly true is that the high stakes game of poker playing out in global markets is getting more painful for its players, but a resolution remains as elusive as ever. As time passes, the chances of an unpleasant ending (whether it’s geopolitical in nature or in the form of further financial instability) proportionally grows.

If you have any questions about this or your investments, our friendly professionals are always on hand to help. Please give us a call on 020 7189 2400, email us at best@bestinvest.co.uk or request a call back and we’ll be in touch as soon as we can.