A look back over macroeconomic and market events for the period ending 10/02/17. There was further evidence of strength in the UK economy and Chinese trade recovered in what was overall a quiet week. There is a lot of mid-level data out this week, which will add some colour to the global economic picture.

In December, strong numbers reinforced other signals pointing to unexpected strength in the UK in the second half of 2016. Industrial production growth accelerated to 4.3% year on year from 2.2% (which had been revised up) in November and well ahead of expectations for 3.2%. Manufacturing production grew 4.0% year on year, from 1.7% in November (1.8% expected). Construction output slowed from 1.8% to 0.6% in year on year growth, but was still ahead of expectations for a -0.5% contraction. Taken in conjunction with improving business confidence and consumers feeling more optimistic with continued wage growth, the short-term economic outlook appears more robust than many predicted, and pressure is likely to start building on the Bank of England to consider tighter monetary policy.

The outlook is not without its medium-term dangers, particularly as recent consumer activity appears to have been fuelled to an ever greater extent by borrowing, and the political backdrop is adding to uncertainty. However, for the moment the UK economy continues to deliver – though investors should be warned that economic growth does not, in and of itself, always translate into investment returns.

A rebound in Chinese trading activity

In January in China, exports grew 7.9% year on year, recovering from a -6.1% fall in December (well ahead of expectations for 3.3%). Imports also surged, growing at 16.7% year on year, up from 3.1% in December and beating the 10.0% forecast. Services PMI slipped from 53.4 to 53.1 (53.6 had been forecast) but remains in expansionary territory. These data support the view that China has managed to stabilise its economy in the short-term, however, we remain deeply concerned that this growth is low quality, fuelled by debt which now appears unsustainable. There is also the growing risk of a trade war with America under the new administration, although it was interesting to note some of the conciliatory gestures last week, as Donald Trump supported the ‘One China’ policy in a call with the Chinese president. Although the authorities will likely do all they can to maintain stability this year ahead of its quinquennial National People’s Congress, a hard landing now appears inevitable and we expect China to allow further gradual depreciation of the yuan through this year.

The US Fed Labour Market Conditions index improved from 0.6 to 1.3 in January, with the IBD/TIPP Economic Optimism index also improving from 55.6 to 56.4. However, the Michigan Consumer Sentiment reading showed a worse-than-expected fall from 98.5 to 95.7 in the February reading (97.9 was forecast)

Equities were slightly higher, though with fairly limited magnitude, whilst sovereign bond yields were somewhat lower as investors bought back in after the sell-off of the last few months. 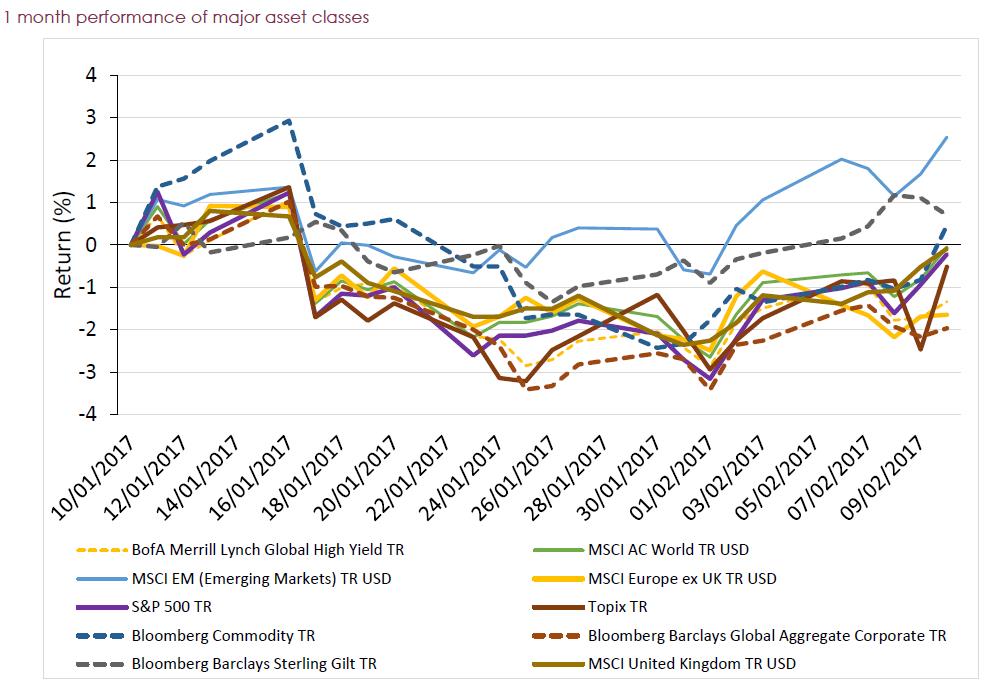 Equities – UK equities (as measured by the MSCI United Kingdom All-Cap index) were up 1.2% on the week, with US equities growing 0.9% (on the S&P 500) and European equities gaining 0.3% (MSCI Europe ex-UK). There was further strength in the Far East, where the TOPIX index of Japanese equities returned 2.1% and the Hang Seng index in Hong Kong grew 2.0%.

Commodities – Oil remains largely unchanged in the mid-to-high US$50s, with Brent Crude finishing the week at US$56.70 a barrel. Copper strengthened sharply on Friday to US$2.76 a lb, and gold was also stronger, rising to US$1,234.40 an ounce by the end of the week.

Currencies – Sterling gained against a weakening euro and also against the yen, but was flat against the US dollar on the week. Sterling finished at US$1.25, €1.17 and ¥142.

There’s a lot of economic data out this week after last week’s lull. Monday night we have Japan’s Q4 GDP numbers out, expected to have slowed from 1.3% annualised to 1.1%. Tuesday morning will see Eurozone industrial production for December (expected to have slowed from 3.2% to 1.7%) with the US following suit on Wednesday with January Industrial Production along with Retail Sales and Inflation data, both of which could influence interest rate expectations. Friday will give us the January Retail Sales in the UK, which are expected to ease from 4.3% to a still-respectable 3.5% year on year. Elsewhere:

Monday: In the morning, China will report on the latest Foreign Direct Investment, but otherwise the day is relatively quiet.

Tuesday: Early in the morning, Chinese inflation data are released, followed by the release of Q4 GDP figures for a number of Eurozone countries, including Germany, the Netherlands and Greece. Later in the morning we will see UK inflation, with the headline rate expected to have increased from 1.6% to 1.9%. In the afternoon, as well as the Eurozone industrial production figures discussed above, the ZEW business survey results for Germany will be reported. US PPI data are out in the afternoon.

Wednesday: UK employment data, including the unemployment rate and the average earnings, are released. In the afternoon, US inflation is reported along with the latest retail sales and industrial production figures.

Thursday: The main data of note are US building permits and housing starts in the afternoon, as well as the updated Philadelphia Fed Manufacturing Index.

Friday: After quite a busy few days, Friday is quieter, with only UK retail sales and Eurozone construction output for December to look forward to.