A look back over macroeconomic and market events for the period ending 17 March 2017. No surprises from Central banks as the US Federal Reserve (Fed) hiked rates and the Bank of England and Bank of Japan held steady. It’s fairly quiet on the data front this week with PMI readings from the US and Europe the main data points. UK Retail Sales on Wednesday could also be of interest given the comments in the Monetary Policy Committee (MPC) minutes.

Entirely in line with expectations, the Fed raised US interest rates 25 bps to the 0.75-1.00% range in what was considered by markets to be a ‘dovish hike’. Following the change in tone from Federal Open Market Committee (FOMC) members ahead of the meeting, the hike itself was already effectively a given. The statement, updated projections and press conference were softer than people expected, causing the US dollar and Treasury yields to fall in response.

Despite the change in rhetoric, the projections – embodied in the ‘dot plots’ of each committee member’s forecasts – showed no change to the median estimate over the next two years, with two more hikes still expected this year. Although there were some changes within the forecast pattern which increased the consensus on the median path, the path itself remains pretty gentle.

Disappointingly there was no mention of if/when/how the Fed will reduce its balance sheet which has been bloated following the quantitative easing programme. Interestingly the statement also highlighted core inflation as running below the 2% target, but offset this potentially dovish line by adding in a reference to the ‘symmetrical’ nature of the inflation target. Most of the reaction was at the front end of the US Treasury curve – as it stands, longer-dated bonds appear complacent to us, and current assumptions of a gradual tightening of monetary policy could be subject to significant revisions once more details of fiscal reform are finally made public.

No changes from the Bank of England

The Bank of England left monetary policy unchanged, as expected, with only one dissenter – the external member Kristin Forbes, who is leaving later this year. The minutes highlighted that, although the unemployment rate has fallen further – it is now at 4.7%, the lowest since 2005 – wages and retail sales data had weakened recently.

Data from the Office for National Statistics (ONS) last week showed that wage growth, including bonuses, fell from 2.6% to 2.2% year on year in January, short of forecasts for 2.4%. However there were also some more hawkish elements in the statement, where “some members noted that it would take relatively little further upside news… to consider that a more immediate reduction in policy support might be warranted.” This was interpreted as being related to the indications in the February meeting that withdrawing monetary support would be appropriate at some point in the next three years.

Clearly retail sales and wage data in the coming months will be particularly important – markets are not pricing in a significant shift in interest rates until late summer 2018, which seems a little too relaxed from our point of view, leading us to prefer to limit our duration exposure within the house investment strategy.

The dovish hike from the Federal Reserve caused US Treasuries to rally (yields to fall) and pushed the US dollar lower, but elsewhere the markets continued to be relatively quiet. 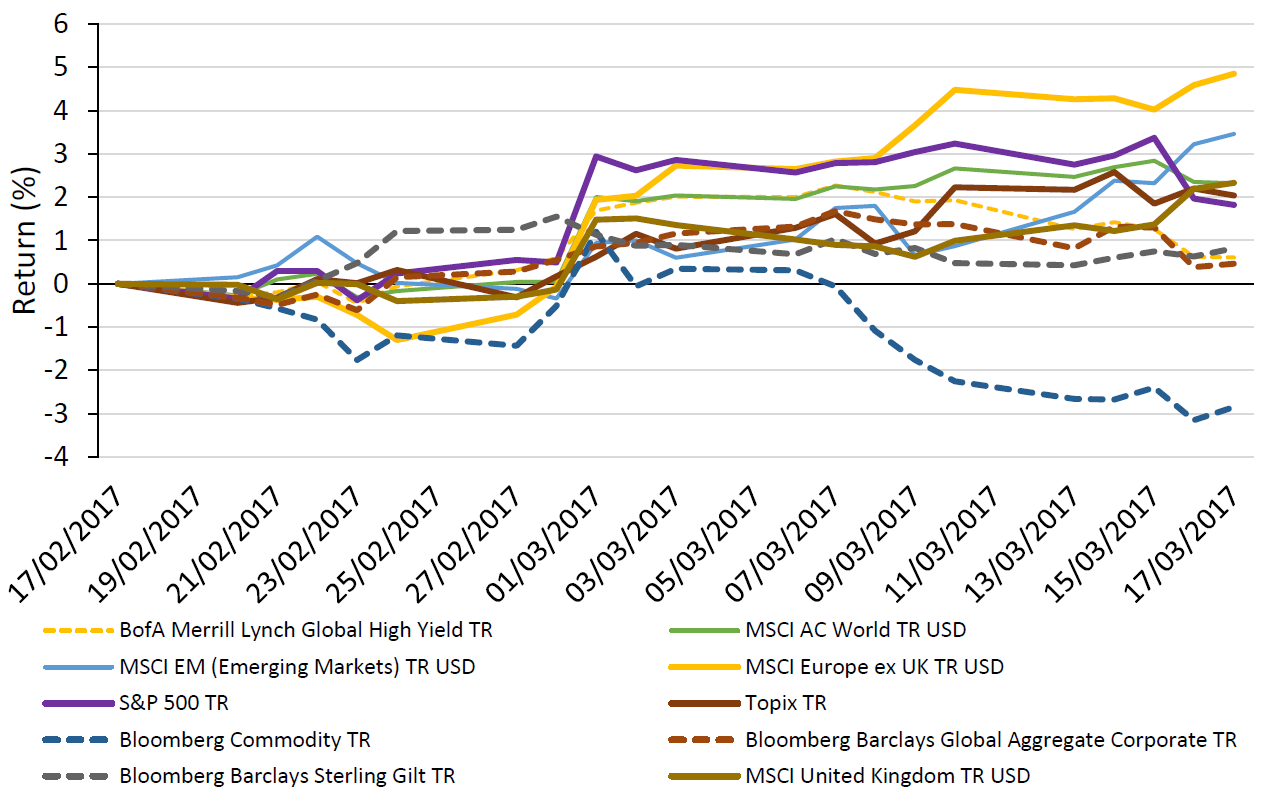 Commodities – oil remained at the lower end of its recent trading range, with Brent Crude finishing the week at US$51.72 per barrel. Gold rallied post-Fed announcement to close at US$1,229.30 per ounce and copper strengthened during the week to close at US$2.69 per lb.

Currencies – Sterling was stronger for the week against the US dollar (to US$1.24) and the euro (to €1.15), but relatively unchanged versus the Japanese yen (end at ¥140).

After a busy couple of weeks, there is something of a lull in scheduled data and activity over the next seven days. UK inflation is out on Tuesday, and is expected to break through its 2% target for the first time since 2013. 2.1% year on year is forecast from 1.8% previously, whilst in our view the more important core inflation measure is expected to rise from 1.6% to 1.8%. UK Retail Sales on Thursday could also be interesting given the comments from the Bank of England – an improvement from 1.5% to 2.6% year on year is expected. Eurozone PMIs are released on Friday morning, with the US numbers in the afternoon, but are not expected to have moved significantly with all measures in the mid-50s (figures below). Friday will also have the US Durable Goods Orders reading, with growth forecast to have slowed from 1.8% to 1.2% month on month. Elsewhere:

Monday – little of note at the start of the week. German PPI is out in the morning, and the Chicago Fed National Activity Index is released early in the afternoon. There is also a Eurogroup meeting commencing in the afternoon, where Greece’s debt situation will once again be on the agenda.

Tuesday – UK inflation data are out in the morning – covered above, though as a side note the ONS will be releasing its new ‘CPIH’ inflation measure which includes a housing cost element alongside the usual CPI basket. Late in the evening the minutes from the Bank of Japan monetary policy meeting are released along with Balance of Trade and Exports data.

Wednesday – Early in the morning (UK time) Japan reports on the All Industry Activity Index. In the afternoon US reports on Existing Home Sales as well as the latest oil inventories, which have been impacting the oil price recently.

Thursday – German Consumer Confidence is reported first thing by GfK. In the afternoon, the Kansas Fed Manufacturing Activity index comes out, as well as New Home Sales and the natural gas inventories. We also have Eurozone Consumer Confidence (expected to have improved from -6.2 to -5.8.