A look back over macroeconomic events for the period ending 27 January 2017. US economic data was a little disappointing, with Q4 GDP and durable goods both misses. There was more optimism in the UK, though, which had a good fourth quarter and showed fresh confidence from business leaders. There is plenty to look forward to this week, with three Central Bank meetings (Bank of Japan (BoJ), US Fed and Bank of England (BoE)) as well as nonfarm payrolls on Friday.

US growth slows down

Growth in the US economy slowed more than expected in the fourth quarter, with initial estimates showing a slowdown from 3.5% annualised in the third quarter to 1.9% in the final quarter, falling short of the 2.2% that was forecast. Although consumer spending came in as expected at 2.5%, it was disappointing trade data that dragged growth down – higher imports and lower exports combining to take -1.7 percentage points from the GDP measure amid a strengthening US dollar. As the new administration in the US takes control of the White House, concerns over a potential trade war could lead to an unpleasant war of attrition which the US economy would not be immune from.

Durable goods were also disappointing. Orders were down -0.4% month on month in December, which comes after a fall of -4.8% in November, and dashing hopes that there would be a rebound to 2.6% – weak autos orders appeared to be the main culprit. There was some positive news, though – services and manufacturing PMI both improved to 55.1 from 53.9 and from 54.3 respectively in January, ahead of forecasts.

There was fresh optimism in the UK, with fourth quarter GDP growth of 2.2% year on year, unchanged from the third quarter and marginally better than the 2.1% forecast. The Confederation of British Industry also reported a surprisingly upbeat business environment. Industrial trend orders were ahead of expectations, improving to a score of 5 from 0 previously – the first positive reading since the start of 2015. Similarly, the business confidence index rebounded to 15 for the first quarter of 2017 from the post-GFC low of -47 following the EU referendum.

On the subject of the EU referendum, we also had the Supreme Court ruling on the Brexit question, which upheld the ruling that the Government required parliamentary approval to trigger Article 50, though the Court also determined that approval from the devolved governments and assemblies was not required. The potential impact of the ruling had already been blunted by pre-emptive moves by the Government to pave the way for legislation – which submitted a bill just 130 words long – but it still managed to cause fresh disruption and rebellion in the ranks of the Labour party.

It was a relatively quiet week, with all movements of fairly modest magnitude. 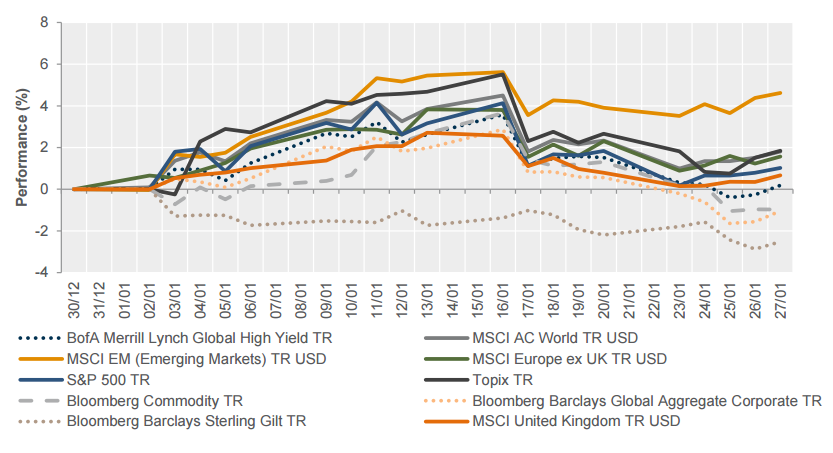 Central bank activity is the theme of the week, with the Bank of Japan’s (BoJ) interest rate decision out in the early hours of Tuesday morning, the US Federal Open Market Committee (FOMC) meeting concluding on Wednesday and the Bank of England’s Monetary Policy Committee (MPC) concluding on Thursday. The FOMC meeting has no press conference associated, so markets won’t be able to do much more than scrutinise the statement for any change in language. Whilst the BoJ appears to have run out of ammunition, it may attempt to influence the markets through some of its rhetoric, particularly as its quarterly outlook report will be released around the same time. The MPC meeting could be more eventful, with the latest Quarterly Inflation Report due out amid questions over the Bank’s initially dire warnings about post-referendum chaos in the event of a ‘Leave’ result given the benign economic data that was subsequently released. The week doesn’t fizzle out, though – Friday we have US nonfarm payrolls, with forecasts for a reading of 168,000 from 156,000 in December. Elsewhere: