As election polls suggest the race between the Conservatives and Labour is narrowing – London-based researcher Survation is predicting a gap of just one point – it is important to consider the potential outcomes, and how you can prepare to make the most, whatever happens on June 8.

There are four possibilities at this election:

Of these, the second and third options are mostly likely, based on current polling data.

In the event the Conservatives win a convincing majority, the result would likely be beneficial for UK equity markets. Domestic stocks are likely to outperform the more internationally exposed FTSE 100 and we are likely to see a near-term rise in sterling. However, most of that pickup is already priced in due to earlier predictions of a Conservative win – so investors should be aware that the greatest risk of movement may lie on the downside if the outcome is less favourable to the Conservatives than expected.

In the event of a weak Conservative majority, market response is expected to be fairly neutral. However, a result in which the Conservatives have a majority of less than 30 seats would be seen as a failure for Theresa May’s plan to reduce the influence of Eurosceptic MPs in her party. This would likely reduce her ability to negotiate a market-friendly Brexit and push negotiations towards confrontation and a hard Brexit, with potentially negative implications for sterling in the medium to longer term.

A ‘hung Parliament’ is looking increasingly possible given recent polls. All predictions are agreed that the largest single party is likely to remain the Conservatives; however our analysis suggests that in the event of a hung Parliament, a left-wing coalition government is the most likely outcome. A recent poll by YouGov predicted Labour and the SNP together would fall short of a majority by just 9 seats – easily within reach, given that the Liberal Democrats currently hold 9 seats. While a Conservative minority government is still technically possible, this is considered unlikely given the perceived need for a strong mandate ahead of the upcoming Brexit negotiations. 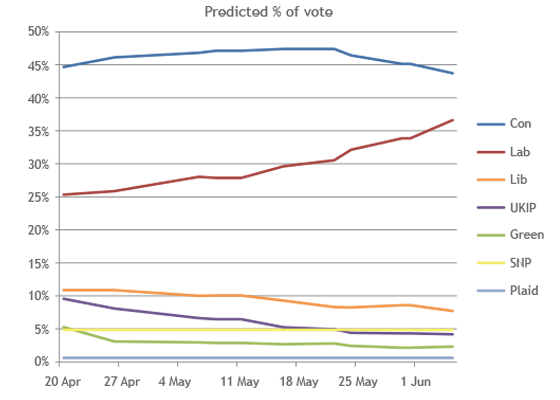 A Labour-led coalition government would likely have a negative impact on domestic UK-focused stocks. Sterling can be expected to fall in the short term and investors may well decide to reduce their exposure to the FTSE. Small caps could take a significant hit, as they did after the Brexit referendum, but those with overseas exposure could rebound quickly. Labour plans to increase corporation tax would likely impact bond markets, causing gilt yields to rise.

The least likely of the four possibilities is an outright Labour victory. To date, no poll has predicted such a stunning upset, but they have been wrong before. From an investment perspective, a Labour win would have much the same implications as a Labour-led coalition, but with a more pronounced effect. Investors may be advised to stick with overseas earners, at least in the short term. A fall in sterling would favour FTSE components that have a strong overseas component; domestic UK-focused stocks would likely suffer. In the medium term, a Labour win could produce a kind of low growth stagflation environment, which would favour investment in bond markets given rising gilt yields.

Focus back to Brexit

However, after the election, the focus will quickly shift back to Brexit, regardless of which party wins. Sterling has been a Brexit barometer over the last year. One question to consider in the event of a Labour win is how quickly the market would realise that a Labour government would be likely to pursue a softer Brexit. That outcome could cause sterling to rise, particularly if a softer Brexit involves the UK retaining access to the European single market in a kind of ‘Brexit-lite’.

In the medium to longer term, the French Parliamentary elections are expected later this month. Newly-elected French president Emmanuel Macron is doing well in the polls, while in Germany support for chancellor Angela Merkel is picking up. Given the recent Dutch election result in favour of a mainstream candidate, the force of political populism in Europe seems to have run its course, resulting in diminishing political risk in Europe. However, Italy is an outlier, and the possibility of an election in September could pose a renewed risk, although this would require a change to current election rules. There is also an ECB meeting on 8 June; Germany is pushing for a reduction of monetary stimulus, which could impact economic growth in Europe.

Looking further afield, US president Donald Trump’s impact on the US economy will be significant for global financial markets. The US economy had a weak first quarter and US equities are currently at high valuations, partly on the basis of expectations which remain speculative at present. A potential slowdown in the Chinese economy could also trigger a growth scare which may negatively impact on global reflation. Meanwhile, the row between Qatar and several other countries in the Gulf region including UAE and Saudi Arabia could impact oil prices, but US shale production is expected to offset any increase in price. Ultimately, the markets’ verdict on Trump will depend on his economic impact. US mid-term elections next year will provide some opportunity for assessment.