The value of farmland has experienced a dramatic rise for a quarter of a century.

By the end of 2014, agricultural land that was purchased in 1992 will have been worth approaching five times its value in real terms, rising, on average, 22 percent per year. Few, if any, farmers will have made this sort of return of money from farming.

Few investors will have made that sort of return in anything!

For the last decade, bank base rates have been at a 300-year (all time) low, making the cost of borrowing money very cheap.

Inflation has been higher than the interest in most savings accounts. Keeping cash has therefore been costly. Thus it has not only been farmers but others keen to protect their capital from inflation that have purchased land. This route has also been tax effective when carefully planned, having helped drive the price of farmland up. 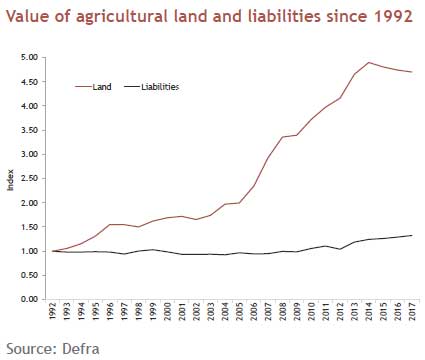 Figures recently published from the RICS/RAU Land Value Survey show that land values fell by approximately 7 percent in 2016. The decline is
thought to be greater for commercial farmland, rather than blocks with a residential component. Some feel the uncertainty surrounding subsidies post Brexit is the main reason for prices easing.

However, land values had started on a downward path before the referendum last year. Whist there was some uncertainty then, most people were confident the vote would be nothing but a 1-day distraction! It is possible that land values have simply been experiencing a ‘correction’ from an overheated market.

The issues of borrowing money in farming are complex. However, for the industry as a whole, the level of debt as a percentage of the balance sheet is below 5%, primarily because of high land values — landowners tend to have very strong balance sheets. The ability to service debt is more of an issue than the provision of collateral on many farms. In the last year, borrowings in farming have been rising at a greater rate than inflation but, over the long term, the increase has been far less than the growth of the asset values it has funded.

The chart shows that in real terms, debt in farming has risen by only about 30% since 1992. For the majority of farms, there is no problem borrowing money at low rates. However some will become exposed to increased repayments should interest rates rise.

The Bank of England has recently become more concerned about rising inflation but the temptation to up interest rates will be tempered should evidence of a slowing economy, reduced consumer spending or business caution mount.

Fixed rates are at their lowest for many years, and those who are likely to need finance for the long term, would do well to consider the implication of this as the outlook for interest rates is uncertain.

A robust business plan and undertaking sensitivity analysis in order to understand the potential impact of changes in different economic factors will help to support the case for financing and help provide the banks with the confidence to lend.