Expectations were high going into the meeting of the European Central Bank’s (ECB) Governing Council, after earlier comments suggested the bank would look at injecting fresh stimulus to boost inflation back to its target. However, although ECB President Mario Draghi announced a raft of measures in the event, they fell some way short of expectations.

The deposit rate paid to ‘normal’ banks depositing excess reserves with the Central bank were cut from -0.20% to -0.30%, and Draghi announced an extension to the QE programme that will now see it continue until “at least” March 2017 – an additional six months. The programme will also be broadened to include regional government debt as well as national debt.

However, markets had been expecting a bit more. Investors had hoped for either a deeper cut – perhaps to -0.40% – or a more aggressive expansion of the QE programme by increasing monthly purchases from €60 billion to €70-80 billion. Their disappointment was shown in the market reaction to the announcement. The euro sharply reversed much of the weakness that had been developing over the last month, whilst equity markets swooned.

Why they did it

The key mandate for the ECB is to maintain ‘stable pricing’, which functionally means inflation at about 2%. And with headline inflation barely above zero, they are feeling the pressure of being a long way from their mark, as shown below. Of course there are a number of transitory factors – such as the oil price – that are keeping headline inflation at this very low level, but of greater concern is the soft ‘core’ inflation reading which strips out these more volatile, external factors. Core inflation stands at just below 1%, and at today’s meeting the ECB announced further downgrades to their inflation forecasts. Taken together, some sort of action was almost inevitable, and had been clearly sign-posted at their previous meeting. 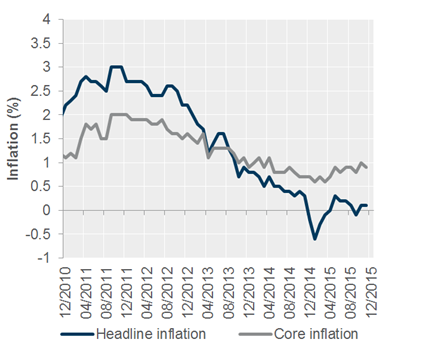 What does this mean?

Markets were already pricing some level of further monetary easing, so the disappointment actually reversed some of the recent market moves. The door remains open for further moves in the future if the ECB’s Governing Council deems it necessary, but what is clear is that there is a significant policy divergence ahead – as the ECB heads down further easing through unconventional monetary policy, while the Fed looks set to embark on a tightening cycle.

Short-dated government bonds across Europe remain in the highly unusual (historically) position of having a negative yield, and this is likely to continue. At the time of writing (15:04 on 3 December 2015), you currently have to actually pay the German government 0.33% for the privilege of lending them money for a year (Source: Factset). Strange times indeed.

We have long believed that QE does nothing to directly boost economic growth, but does drive equity prices higher simply through greater liquidity in the financial system. As a result, we remain positive on the outlook for European equities, despite the challenges that remain in the region. Moreover, we remain wary on fixed income in the region, as QE is ultimately intended as a pro-inflation, pro-growth policy – two factors that generally work against fixed income assets.

Market expectations were very high going into this decision, meaning some disappointment in the short term and temporary relief for some of the recent pricing pressure. However, it is important not to view this meeting in isolation and to instead add this latest information to the bigger picture of the global monetary policy environment.

Furthermore, at some point there remains a serious risk that excessive and unconventional monetary policy becomes discredited and Central banks lose credibility in the eyes of the markets, which could cause serious stress in the financial markets.

We remain wary to this possibility, and have been steadily de-risking the portfolios we manage whilst recognising that there remain parts of the market that can continue to provide investment returns.