A look back over macroeconomic events for the week ending 08/04/2016. A quiet week in news flow and markets, with most interest coming from the signs of disagreement at the US Federal Reserve (Fed) and European Central Bank (ECB) over monetary policy. This week it’s the turn of the Bank of England to have its policy meeting, whilst a number of regions report industrial production and China provides an initial estimate of Q1 GDP growth.

Disagreements within the US Fed and ECB

The minutes from the most recent monetary policy meetings at the US Fed and ECB highlighted clear divides within both committees, which has also been apparent from conflicting messages being expressed during a range of recent speeches – most notably from the Fed Chair Janet Yellen several weeks ago. The lack of clarity over the course of the global economy has been posing a particular challenge for Central bankers recently, who are faced with lacklustre global growth and labour markets where basic employment numbers are improving but productivity is not.

In the US, unemployment is fairly low and inflation has been picking up recently, effectively hitting the official mandate of the US Federal Reserve – hence the surprise at Yellen’s excessively dovish tone. At the same time, the economic outlook is still fairly muted and signalling is ever important. The minutes showed some members advocating a rate hike as soon as April on the back of the strong data, whilst others being concerned that such a move would “signal a sense of urgency they did not think appropriate”, and again global financial conditions were raised as a key risk to the downside.

Across the Atlantic, the minutes from the ECB meeting also highlighted reservations, this time against the further loosening of monetary policy. Concerns included that the new targeted longer-term refinancing operations (TLTRO) auctions were excessively generous, which could encourage bad business practices by banks, and that extending quantitative easing to include the purchase of corporate bonds could lead to further market distortions. It appears that both of Germany’s council members, as well as the head of the Dutch Central bank, were among four to object to the recent package (2 voting, out of 21, and 2 non-voting).

Against these, reports relative to March for services and construction painted a more positive picture. Markit/CIPS Services PMI for March improved from 52.7 to 53.7 (in line with forecasts) whilst Construction PMI held steady at 54.2 (against forecasts for a marginal slip to 54.0).

With a quiet week for news flow, markets were overall quite uneventful with the exception of a surge in the Japanese yen. 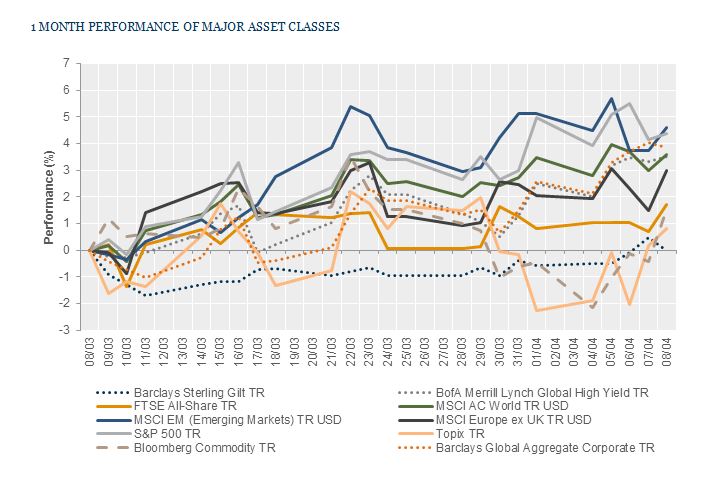 Equities – The UK had the best performance of the major equity markets, with the FTSE All-Share up +0.8%. Europe was flat on the week (FTSE Europe ex-UK) as was Hong Kong (Hang Seng index). Japanese equities slipped -1.0% as the yen rallied, and US equities had a relatively tough week, falling -1.2% (on the S&P).

Commodities – Oil rebounded during the week, with Brent crude oil back in the 40s at US$41.94 a barrel. Copper was slightly weaker at US$2.09 per lb and gold was marginally stronger, last seen at US$1242.50 an ounce.

This week the calendar picks back up, with the Bank of England’s Monetary Policy Committee meeting concluding on Thursday (no activity is expected). Industrial production figures will also be released, starting with the Eurozone on Wednesday (forecasted to have slowed from 2.8% to 1.2% year on year), from China overnight Friday (expected to have accelerated from 5.4% to 5.9% year on year), and fromthe US later on Friday (expected to remain weak after the -1.6% year on year reading last month). China also reports first quarter GDP on Friday, with expectations that year-on-year GDP will have slowed from 6.8% to 6.7%. Elsewhere:

On Monday we have reports from China on Foreign Direct Investment as well as inflation. Expectations are for headline inflation to be up 0.2% to 2.5% year on year, but for the producer price index to remain negative at -4.6%.

This is followed on Tuesday morning by UK inflation, which is forecast to have increased 0.4% year on year (from 0.3% last month). In the afternoon the US will update the latest change in month-on-month import and export prices.

Early on Wednesday morning China reports its latest balance of trade, including the change in imports and exports. Forecasts are for exports to have grown 2.5% year on year after many recent negative readings, although imports are expected to remain negative. Mid-morning will deliver the Eurozone industrial production figures and then in the afternoon US retail sales figures are released, followed by the Fed’s ‘Beige Book’ of qualitative and anecdotal economic reports.

After the Bank of England meeting wraps up at lunchtime, on Thursday afternoon the US will report inflation. Headline inflation is forecast to be up 1.2% from 1.0% year on year previously, while core inflation is expected to be unchanged at 2.3%.

As we move on to Friday, China will update fixed asset investment, industrial production and retail sales at the same time as announcing Q1 GDP growth. Later in the morning, UK construction output and Eurozone balance of trade data are both reported. And to finish the week, on Friday afternoon the US reports industrial production (and the Empire State manufacturing index) then later the Michigan Consumer Sentiment measure.