A look back over macroeconomic events for the fortnight ending 13/05/2016.

Bank of England on Brexit, growth and interest rate forecasts

Although the Bank of England left monetary policy unchanged at its meeting on Thursday, it used the meeting itself (as well as the quarterly inflation report) to intervene surprisingly aggressively in the Brexit debate. Although there were no hard-and-fast numbers included, the Bank of England warned that Britain leaving the EU would likely materially lower growth, drive up inflation and harm UK employment. At the same time, the Central Bank estimated that around half of sterling depreciation since November last year was due to concerns over the EU referendum, and confirmed that it expects a “Leave” vote would cause a fresh wave of devaluation.

Away from the Brexit discussion, the Bank also lowered growth expectations for the next three years, now expected at 2% GDP growth for this year (down from 2.2%) and only 2.3% for the next two (down from 2.4% and 2.5%, see chart below left).

At the same time, the Bank also noted the collapse in market-implied interest rate expectations which have flattened significantly – markets now expect rates to be just 0.7% on a probability-weighted basis in three years’ time, down from expectations of 1.1% back in February. Our house stance remains cautious, with lower growth and a dovish interest rate outlook for the UK and US two of the six themes for 2016. In line with the subdued newsflow, it was a fairly quiet week for the markets. Equities moved mostly sideways through the week, whilst sovereign bond yields ticked down once again. After recent weakness, the US dollar regained some strength. 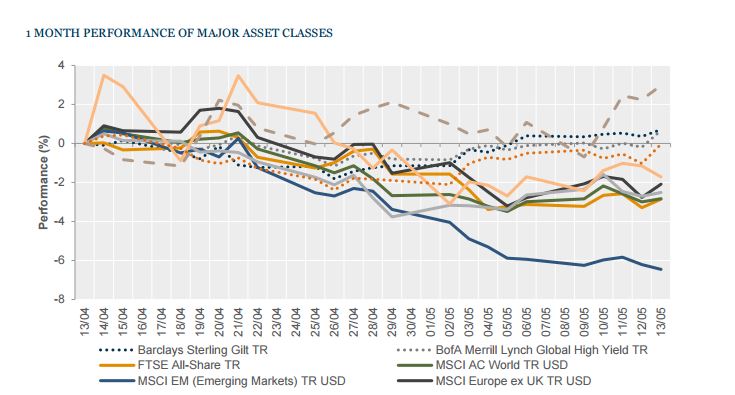 Developed western equity markets were fairly uneventful on the week. In the UK, the FTSE All-Share gained just +0.2%, while in the US the S&P 500 slipped -0.5% on the week. The FTSE Europe (ex-UK) index was also off -0.3%. Japan was the only major index to have a solid week, reversing earlier losses with a gain of +1.7%, while in Hong Kong the Hang Seng shed -2.0%.

Given the supply-side pressures, particularly from events in Canada, Nigeria and Venezuela, oil prices strengthened on the week but were still short of the US$50 per barrel mark. Brent Crude finished the week at US$47.83. Copper continued to give up its recent strength, falling to US$2.08 per lb, whilst gold was slightly softer on the week, ending at US$1,271.90 an ounce.

Sterling slipped 0.5% against the US dollar which strengthened against all major currencies, and was last seen at US$1.43, but was up against the euro and yen, last seen at €1.27 and ¥155.81 respectively.

We have another relatively quiet week coming up. On Wednesday the Federal Open Market Committee meeting minutes will be released, which may provide further insight after the non-statement released at the meeting, whilst the equivalent European Central Bank (ECB) monetary policy meeting accounts are released on Thursday morning. On Tuesday night (UK time) Japan will release its Q1 GDP figures – forecast to come in at just 0.1% quarter on quarter. Given the -0.3% contraction in Q4, a disappointment here could indicate the economy is back in technical recession. Closer to home, on Thursday UK retail sales figures for April are forecast to have marginally slowed from 2.7% to a still healthy 2.5% year on year. Elsewhere:

On Wednesday Chinese house price data are reported overnight, followed by UK unemployment data (expected to be unchanged at 5.1%). Late in the evening Japanese machine orders are reported, with forecasts for 0.5% month-on-month growth in March, following the sharp -9.2% fall in February.

Aside from UK retail sales figures and the ECB accounts, Eurozone construction output is reported on Thursday morning (the March reading, after February saw 2.5% year-on-year growth). The Philadelphia Fed Manufacturing index is also out in the afternoon.

On Friday morning the UK’s CBI reports industrial trends orders, whilst the only data of note in the afternoon is existing home sales in the US. However, Friday does mark the start of the two-day meeting of G7 Finance ministers and Central bank governors, which could provide some intrigue early next week.