US data continues to disappoint

US data continued to disappoint, with misses in retail sales and productivity measures. There has been little good news recently apart from the bumper – and somewhat incongruous – non-farm payroll numbers. Non-farm productivity fell for the third straight quarter, falling -0.5% quarter on quarter from -0.6% in the first quarter, whilst expectations had been for a pick up to 0.4%.

Unit labour costs increased 2.0% quarter on quarter. Retail sales also collapsed, with no month-on-month increase in July, after 0.8% in June and expectations for 0.4% growth. Excluding autos, retail sales actually fell unexpectedly by -0.3% month on month (from 0.9% in June and forecasts for 0.2%).

We continue to believe that the US economic cycle looks late-cycle, and it is difficult to make a compelling case for sustained economic growth in the medium term. The current valuations on US equities appear unjustified to us, and we maintain underweight exposure in our portfolios.

More evidence of a Chinese slowdown

There was yet more evidence of the slowdown in China this week, as key measures of economic activity fell more than expected. In July, retail sales fell from 10.6% to 10.2% year on year (10.5% expected), industrial production slipped back to 6.0% (6.1% was forecast), while fixed asset investment fell from 9.0% to 8.1% against expectations of a much more moderate fall to 8.8%.

Trade data were also worse than expected. Exports were -4.4% lower than a year before, against forecasts for a -3%, but still an improvement on the June figure of -4.8%. Imports data were worse, with the fall accelerating to a -12.5% contraction from a year earlier, after a reading of -8.4% in June and expectations for an improvement to -7.0%. We have flagged before the severe structural challenges facing the Chinese economy, an area we continue to limit our exposure to.

Previously we’ve highlighted the lack of coherence between various measures of economic health in the US – most recently between a strong showing in headline employment and inflation data, but more lacklustre GDP growth (at least on early estimates).

Conflicting data add to uncertainty over the investment outlook for the US, and clearly impacts expectations for US monetary policy. The Fed’s main objectives are inflation at 2% and unemployment at 4.8%, and on both of these the markets are already nearing, at or past the target (there are several different measures for both factors). However, with the Fed increasingly looking at broader measures of the health of the labour market and economy, we continue to believe interest rates are going nowhere any time soon.

Aside from the misses on GDP growth expectations, labour productivity has fallen for the third consecutive quarter, clearly suggesting there is something going on in the labour market. Capacity utilisation appears to have been falling steadily since late 2014 – it’s unclear the exact reasoning, though some suggestions support the thesis that this is the result of labour-for-capital substitution. Wage growth remains fairly reasonable, so the falling productivity measure suggests companies are now effectively paying staff more to produce less – a factor likely to increase pressure on profit margins.

With US equities already looking expensive relative to earnings, it seems difficult to justify these valuations when we expect profit margins to come under pressure, and earnings are already falling (which pushes the valuation higher). On top of this, with weak domestic retail sales, any hawkishness from the Fed could further hinder US corporations through a strengthening dollar. With our concerns over valuations and the sustainability of the US economic recovery, we continue to favour reduced exposure to US equities.

European equities (including the UK) had another strong run, whilst the US and Japan were fairly unmoved on the week. Sovereign bond yields continued to fall, becoming more negative in Germany. 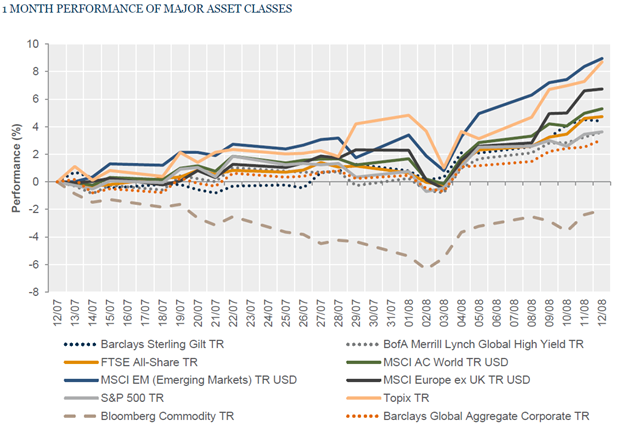 Commodities – Oil regained a little bit of strength but remains below US$50, with Brent Crude ending the week a fraction below US$47 at US$46.97. Gold was relatively unchanged at US$1,335.80 an ounce whilst copper was slightly weaker and finished the week at US$2.14 per lb.

It is another relatively quiet week again this week. We get more details of Central bank discussions with the release on Wednesday of the US Federal Open Market Committee (FOMC) minutes followed on Thursday by the ECB equivalents. On Tuesday the UK inflation data are expected to show a -0.1% month-on-month fall in July, with the year-on-year figure expected at 0.5%. UK retail sales figures are released on Thursday, with growth forecasts at just 0.1% month on month and 4.2% year on year. Elsewhere:

Early on Monday morning Japan releases its first estimates of Q2 GDP, then the Empire State Manufacturing index comes out at lunch time. On Tuesday we have UK inflation, followed by the ZEW economic sentiment index for Europe and Germany. In the afternoon there is a run of US data, with housing starts, inflation and industrial production figures all due out. Ahead of the FOMC minutes on Wednesday, the only data of interest are the UK labour figures, which will have average earnings as well as unemployment.

Following the UK retail sales figures on Thursday morning, Eurozone numbers for construction output and inflation are released before the ECB monetary policy meeting minutes are released at 12:30. In the afternoon the US updates the initial jobless claims and the Philadelphia Fed Manufacturing Index. We then have a quiet end to the week, with no significant data released on Friday.