The Bank of England’s (BoE) recent decision to cut interest rates to a new all-time low of 0.25% may have cheered borrowers, but it represents further pain for savers coming after several years of meagre returns on their cash deposits. Alongside this, the BoE announced a £70 billion round of Quantitative Easing (QE), a process where it will create new money electronically and use it to purchase £60 billion of gilts (UK Government bonds) and also £10 billion of UK corporate bonds from investors.

This process of mass bond buying keeps bond prices high and therefore yields on them low, effectively lowering long-term borrowing costs in the belief this will support the economy. But of course it also means investors have to look elsewhere for a decent income, so low interest rates and QE have the effect of flushing investors into riskier investments such as shares.

Although interest rates were already at an all-time low prior to the cut, savers and investors doggedly continued to tuck their hard-earned cash into savings account, including cash ISAs. The graph below, which is the last set of data on ISA accounts provided by HMRC, clearly shows how consistently cash has continued to dominate overall ISA account openings despite a prolonged period of miserable returns on cash (and conversely buoyant investment markets). 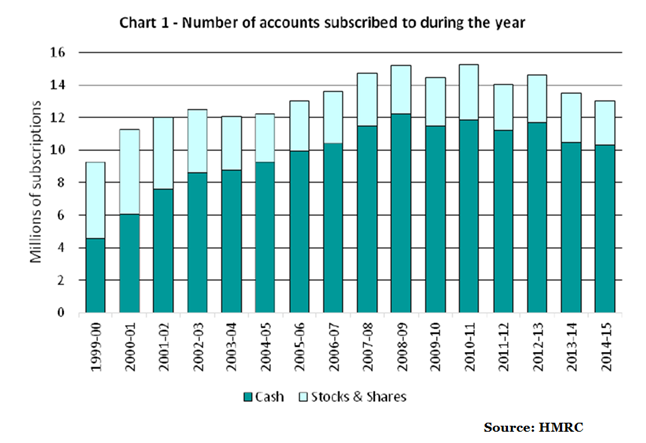 Even when it comes to Junior ISAs, where the proceeds cannot be accessed until a child reaches 18 years old, around 71% of subscriptions have gone into cash rather than investment accounts, despite the very long-term nature of these accounts.

Of course investing in the markets, which can be volatile, won’t be suitable for everyone, particularly those who might need to use the cash within a short time horizon. It makes sense to keep some cash tucked away for a rainy day or unexpected emergency. But as a place to store wealth for the long-term, cash is very unattractive. While cash is regarded as very safe, over time its real value gets slowly eroded by inflation – the silent assassin of wealth. In recent times inflation has been incredibly low, battered down by weakness in the prices of oil, gas and other commodities that affect the costs of manufactured goods. But the Bank of England’s long-term target rate is 2%, well above current interest rates and gilt yields. With sterling having weakened this year against other currencies, the prices of various imports is expected to rise, so the Bank of England expects inflation to rise to 1.9% next year and further in 2018.

When interest rates go down but inflation goes up, it really is time to think about whether you are holding too much long-term cash and whether this could be put to better use.

What is the effect on pensions and retirement?

But it isn’t just savers holding lots of cash that should reappraise their situation in light of the latest moves by the Bank of England. These moves could have a profound impact on pensions and retirement plans too. Gilt yields, which were already incredibly low, have been decimated in the aftermath of the rate cut and volley of QE bond-buying, with gilt yields briefly dipping into negative territory this week and 10-year gilt yields currently at just 0.54%.

The impact of very low gilt yields will be particularly felt by anyone close to retirement who might be thinking of using their pension pot to secure a guaranteed income for life though the purchase of an annuity. Rates on annuities are closely linked to gilt yields, so the collapse in these will have a big and unfortunately negative impact on the amount of guaranteed income a pension can buy. It is vital to think carefully about such a decision. For some this might involve delaying such a purchase and considering other options such as keeping the pension invested but taking an income from it through drawdown. It will certainly be more important than ever before to hunt for the best terms available if an annuity purchase remains the preferred course of action.