What is value investing? Simply put, value investors look to buy assets below their intrinsic value. Benjamin Graham who is revered as the pioneer of value investing famously once said “buy cheap, sell dear”.

For companies to be considered cheap, one must believe that equity markets are not efficient, that is they do not accurately price in all the available information, and secondly hold the view that humans can be irrational. We have behavioural biases, such as overreacting to bad news, which allows for mispriced opportunities.

Value investing has been proven by academic research as a successful strategy and most famously advocated by Warren Buffet. However, since the great financial crisis of 2008 the value risk premia appears to have stopped working, especially against the growth style of investing, as depicted in the chart below. 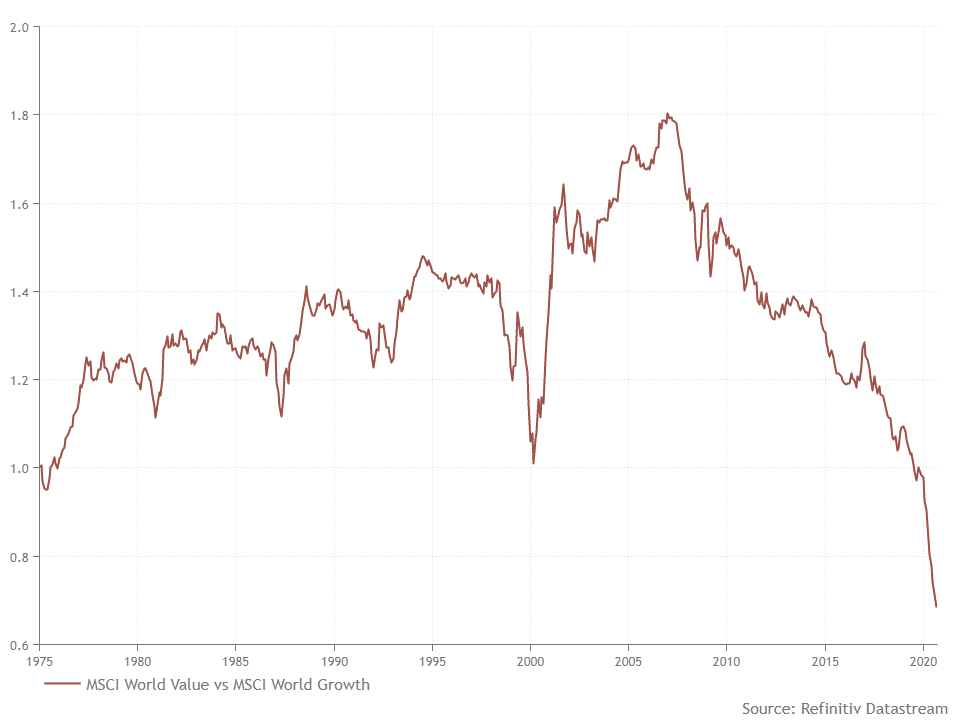 The length and magnitude of this underperformance has meant the value spread, the ratio of how expensive stocks are vs cheap stocks using the price-to-book (P/B), is at an all-time high 1.

However, some critics dismiss this arguing the measure has no relevance in today’s world where technology companies dominate, as it does not take into account their dominant market positioning, brand strength nor intellectual property.

Instead, let’s examine the price-to-earnings (P/E). The chart below shows the P/E ratio of growth stocks against value stocks and its near enough at its low over the 16-year period. 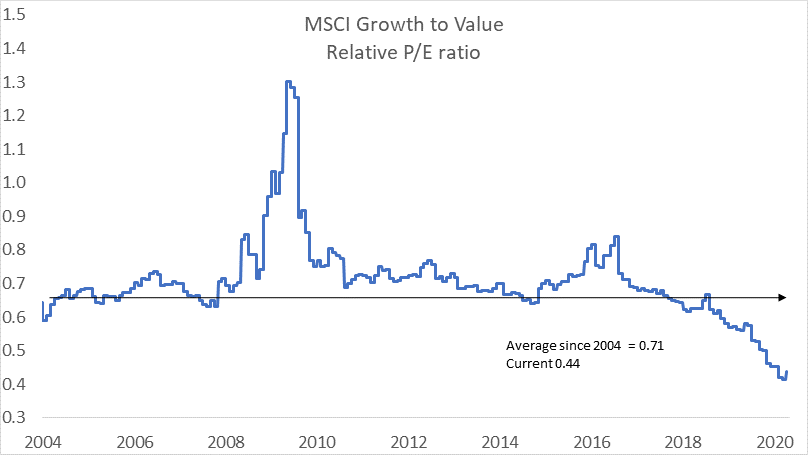 A similar study by AQR1 (over a longer period and with slightly different methodology) also found the spread between the expensive and cheap stocks on both the trailing and forward P/E were at records levels.

It is well known that the large cap technology stocks are dominating indices. To address this the AQR study systematically excluded the top 5% mega cap stocks and the result was the same, the composite spread2 was the largest it has ever been.

There’s no disputing that value stocks are looking cheap especially when compared to growth stocks, but does this translate into outperformance going forward? JP Morgan3 recently performed a 30-year analysis on growth vs value and when dispersion was in the top decile then value outperformed growth by the magnitude of 37% in the subsequent 12-months for pan-European Small and Mid-caps.

With the current backdrop of large valuation dispersion, this should provide a fertile environment for the active value investor. Additionally, an active investment manager would not indiscriminately hold companies because they are cheap and therefore should be well positioned to mitigate ‘value traps’. This is when an investor buys a cheap company based on the valuation only for the price for the price to fall further.

It has been said that value investors worship at the altar of ‘mean reversion’ but are there other drivers for a value resurgence?

Sam Pham from Smith and Williamson performed4 a regression analysis using these four variables against the value index and found it explained over 90% of the performance. In other words, the outperformance of growth or underperformance of value has resided from the effect of these four factors.

This makes logical sense given the sectors that value has more exposure to such as Financials and Energy. Financials have been adversely affected by the decline of interest rates and yield compression. The reduced margins have squeezed the profits banks can make when receiving deposits and lending these out, while Energy has suffered with the fall in Oil prices.

It has also been suggested in a low growth world, investors have been willing to pay more for companies that are able increase revenue at a faster rate, hence the higher P/E ratios of these companies. Another proposition spouted for the increasing P/E ratios of growth stocks is that investors have reduced their discount rate along with falling interest rates, meaning the future cash flows are discounted at a lower rate which increases the present value of growth companies. To us this is an oversimplification, given the cost of debt forms only part of the weighted average cost of capital, which should be used for discounting cash flows.

With COVID 19 slamming the brakes on the global economy, could a re-accelerating world be the catalyst for a value resurgence? Recently, we have started to see the 30-year US treasury yield increase reflecting higher growth expectations and steepening the yield curve. Investors are questioning whether we are at the dawn of a third industrial revolution from AI, which could possibly ignite global growth and in turn benefit value.

A persistent weaker USD would be another reason to be more constructive for value given a strong USD was one of the key factors in the regression which explained over 90% of the underperformance.

However, timing a factor rotation is notoriously difficult and therefore it makes sense to gradually increase the value factor exposure. Also, as most fund managers are relatively underweight to value a sharp style reversal would be detrimental to the performance.

In summary, on a relative basis value appears to be oversold and the current environment could be fruitful for an active value investor. We are not calling the end of the cyclical outperformance of growth relative to value but we believe it makes sense at this juncture to increase exposure to value orientated managers, as history has shown the probability of outperformance would be on your side in the long run.