While currency traders focus on the spending policies of a new US government under President Joe Biden, it is worth reflecting on a unique achievement by the first Democrat president, Andrew Jackson.

In January 1835, Jackson’s government paid off the national debt by selling tracts of federal lands in the West and raising tariffs on imported consumer goods. He remains the only president in history to run the country debt free. It didn’t last long, as the government started to raise borrowing by the end of 1835. Public debt went on to hit first-time milestones of $1 billion during the Civil War of 1861-1865, $1 trillion at the height of the Cold War in 1982, $10 trillion following the 2008 Global Financial Crisis and years of war in Iraq and Afghanistan1. Fast forward to today and the national debt is currently running at just under $28 trillion2. Given the rising cost of supporting the economy during the pandemic, public debt could well breach the $30 trillion milestone by the end of this year or next. Treasury Secretary nominee Janet Yellen made clear the government’s direction on debt in her confirmation hearing when she said, “But right now, with interest rates at historic lows, the smartest thing we can do is act big”. In terms of its size in the economy, we estimate public debt was 135% of GDP in 2020, exceeding the previous peak of 116% in 1946, just after the Second World War (chart 1)3.

Chart 1: US public debt throughout history 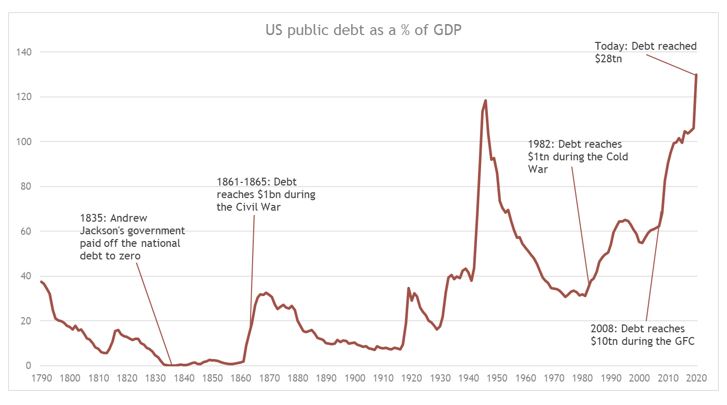 Given the fiscal response to the pandemic and the size of accumulated borrowing, we expect debts and deficits to be a drag on the dollar over the coming years, which in turn has investment implications. Here’s why.

First, foreign buyers have shown less appetite for US Treasury bonds. Considering the huge debt load, the US government is reliant on the willingness of investors to rollover an unprecedented $10trn in gross (including existing and new) Treasury issuance expected this year4. Given this refinancing risk, and the fact that not only are Treasury yields historically low but below the rate of inflation, it appears that the reward relative to risk looks unfavourable for dollar bond investors. As such, foreign investors - who owned a peak of 57% of the marketable Treasury securities in 2008 when the Fed started Quantitative Easing (QE) - have since seen their share steadily fall to 35%, the lowest ratio since 20015. Essentially, foreign investors in Treasuries have not been able to keep up with the new issuance pace and Fed purchases of bonds (chart 2). In the current environment of endless QE, it’s hard to see overseas investors raising their ownership of the Treasury market. 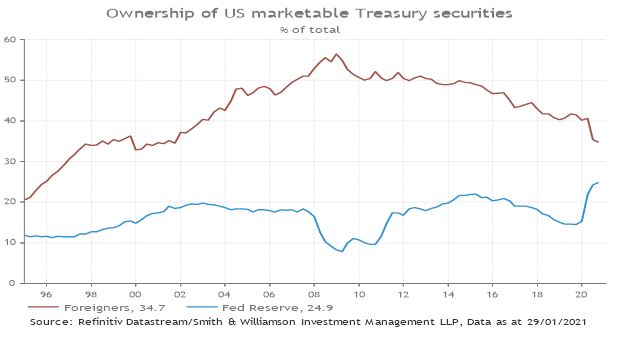 Second, a higher consumer price inflation rate in the US over the Eurozone tends to weaken the US dollar against the Euro, as the cost of owning cash is eroded by relative consumer price increases. As it stands, US consumer price inflation is running 1.6% points higher than the Eurozone (chart 3)6. We think that inflation differential is likely to remain wide and put downward pressure on the dollar. That’s because the bulk of fiscal spending is tilted towards the US consumer, more so than in other major countries. For instance, a breakdown of the 2020 US fiscal stimulus shows that 56% was accounted for by job retention schemes, direct cash payments and unemployment insurance, compared to 26% for Germany, 28% for the UK and 18% for Japan, where tax relief, public investment and business loans/grants made up the bulk of the stimulus7. With more money in the hands of US consumers from fiscal handouts, we think that the risk of higher inflation in the States is elevated.
Furthermore, given the disruption caused by the pandemic in the service sector, there has been a noticeable relative increase in US cost push inflation, such as wages. Though there are discrepancies in like-for-like comparisons, third quarter 2020 US hourly compensation for non-farm businesses rose of 8.2% from a year ago and is noticeably higher than hourly wage growth of 2.1% in the Eurozone8.

Chart 3: CPI inflation differential of the US to the Eurozone 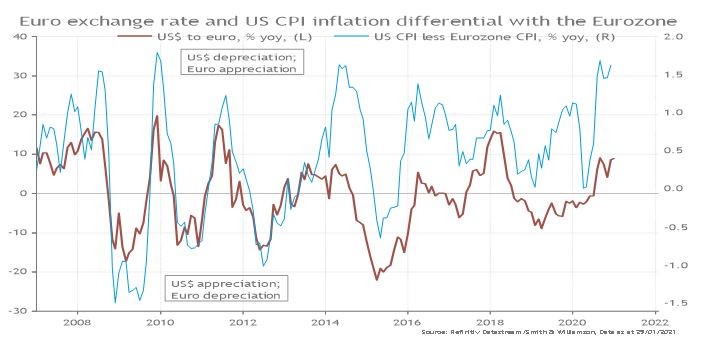 Third, a widening in US fiscal deficit is less favourable for the dollar in terms of the money flow through the Balance of Payments. By providing more stimulus to boost consumption, increased import demand will widen the trade deficit. This is evident in Chinese exports to the US in December, which grew at a rapid 35% rate compared to a year ago9. Ironically, COVID-19 has led to greater stimulus in the US and boosted demand for Chinese goods!

One way to measure the underlying flow of money in and out of the US is via the private basic balance (PBB), which is the sum of the US trade balance in goods and services and net capital account flows (excluding foreign central bank purchase of Treasuries). In other words, this metric accounts for private demand for the dollar and historically has moved in line with US Trade Weighted Index, a reflection of the dollar exchange rates against other major currencies (chart 4). The latest data shows that following an outsized PBB net inflow into the US of $104bn in March 2020, precipitated by US repatriating overseas capital at the height of pandemic uncertainty, it has since swung to a deficit of -$22 billion in October10. Simply put, private demand for the dollar has deteriorated.

Chart 4: The US private basic balance has moved back to a deficit 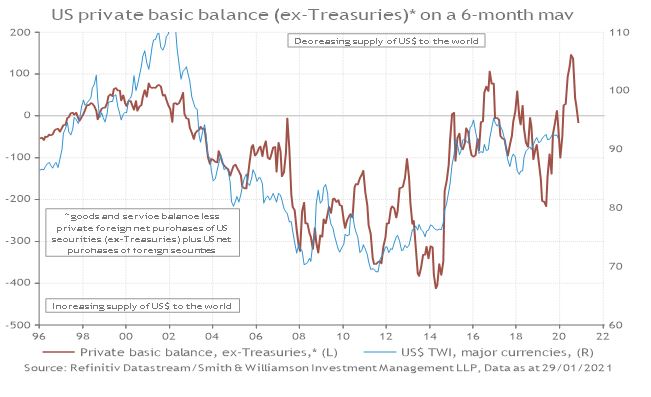 With record US money supply trickling into the global financial system, driven by fiscal stimulus, the US dollar trade weighted (DXY) index has fallen 12% since peaking in March11. Although the DXY has stabilised this year as investors hold cash during the current equity volatility, it could be in for renewed weakness once it becomes clearer how much more the US budget deficit is set to expand. Morgan Stanley (MS) expects a $1 trillion in coronavirus-related stimulus (downgraded from $1.9 trillion originally proposed by Joe Biden to get it through Congress) to be entirely deficit-funded and legislated in the first quarter of 202112. MS also anticipates the government to layout a longer-term healthcare and infrastructure spending package worth around $1.5 trillion, of which $1 trillion will be funded by the deficit and the rest from higher taxes over the next decade13. Joe Biden has indicated that his long-term spending plans could be announced in February.

While greater infrastructure spending may improve US productivity over the long term, it will do little to improve the deteriorating state of US public finances. In January, the IMF revised down its US 2021 budget deficit projections to -11.8% of GDP from
-8.7% in its previous update in October14. If realised, this forecast would be second widest deficit since WW2 after -17.5% of GDP in 202015. As currency traders start to grasp the extent of US borrowing and the expected rise in US dollar supply from a widening private basic balance, we expect the DXY to take another leg down during 2021.

Arguably, the key beneficiary from a weaker dollar are Emerging Market (EM) financial assets. EM equities tend to outperform their counterparts from developed markets when the dollar weakens and vice versa. That’s because large quantities of dollar-denominated debt held by EMs is easier to pay back in times of dollar weakness, allowing for equity valuation multiple expansion. 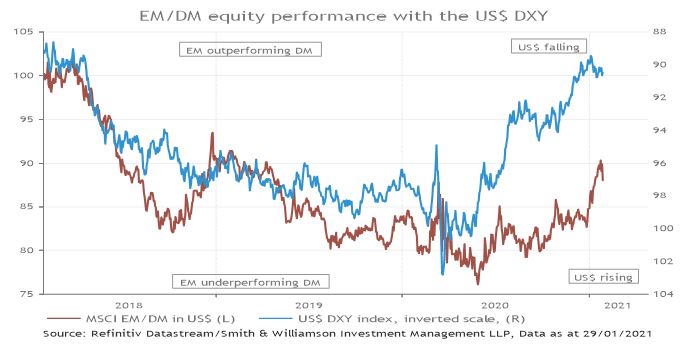 The risk of a stronger US dollar is that the Fed decides to surprise markets by pulling back on easy monetary policy to raise interest rate expectations on the back of a successful vaccine rollout and elevated fiscal spending. On balance, we think Fed easing does not look likely to end anytime soon. In a major policy change in September, the Fed made clear that it intended to “run hot” with regards to maintaining easy monetary policy in order to achieve above 2% inflation. And more recently in December, the Fed strengthened its forward guidance on Quantitative Easing (i.e. asset purchases) and expects its policy interest rate to remain near zero until the end of 2023. This should limit the risk of dollar appreciation.

Risk warning
Investment does involve risk. The value of investments and the income from them can go down as well as up. The investor may not receive back, in total, the original amount invested. Past performance is not a guide to future performance. Rates of tax are those prevailing at the time and are subject to change without notice. Clients should always seek appropriate advice from their financial adviser before committing funds for investment. When investments are made in overseas securities, movements in exchange rates may have an effect on the value of that investment. The effect may be favourable or unfavourable.

Note to editors
Tilney Smith & Williamson is a leading financial and professional services firm providing a comprehensive range of investment management, tax, financial advisory and accountancy services to private clients and their business interests. The firm’s c1,800 people operate from a network of offices across the UK, Ireland and Channel Islands. The Financial Conduct Authority does not regulate all of the products and services referred to above, including tax, assurance and business Services.

Smith & Williamson LLP
Regulated by the Institute of Chartered Accountants in England and Wales for a range of investment business activities. A member of Nexia International.

Capital Gains Tax – what do you need to know?

Capital Gains Tax has had a lot of attention recently because of speculation over possible changes but it is still less well known and understood than many other taxes. Here Ian Dyall, our Head of Estate Planning, gives an overview of Capital Gains Tax

Changes to auditing standards – the impact on your charity

We have all seen the headlines about large corporate collapses and questions about the role of the auditor, so it comes as no surprise that auditing standards have been enhanced.