The crash in the price of sterling following the EU Referendum has been key to the record income recorded across the industry, according to analysis of the most recent set of the Top 50 law firm accounts by Smith & Williamson.

The most recently filed figures, covering the period 2016-2017, have identified near double digit increases in fee income and operating profit, with both rising 9%.

While these rises are hugely impressive (during, largely, a period of consolidation across other sectors), there are concerns that they mask problems under the surface.

Following the 2016 EU Referendum the value of sterling declined over 10% compared against the dollar and other major currencies. A significant number of the top 50 law firms are international, with a proportion of their income being received in foreign currency. Therefore, the currency movement gave them an additional sterling benefit. 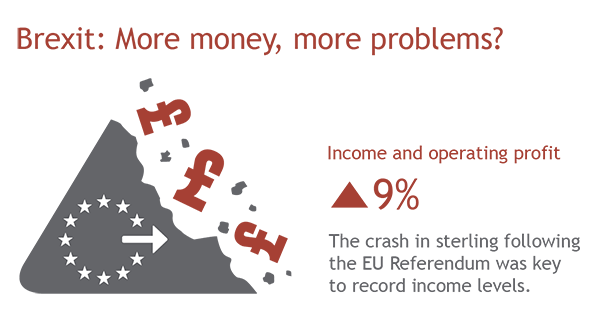 It will be interesting to see whether the top law firms are able to demonstrate such high growth percentages when they release their results for the subsequent year in the coming months. Sterling has recovered to some extent, so we may be able to see whether the big rises in income were related to the good work of law firms or just down to currency movements.

With only a handful of exceptions, the top 15 law firms reported double-digit rises in fee income and significant rises in profit margins. However, when one looks outside of the top 15, the picture is a little bleaker for the industry. A number of firms had single-digit fee income rises or even declines, and an even greater number had a decrease in their profit margin. 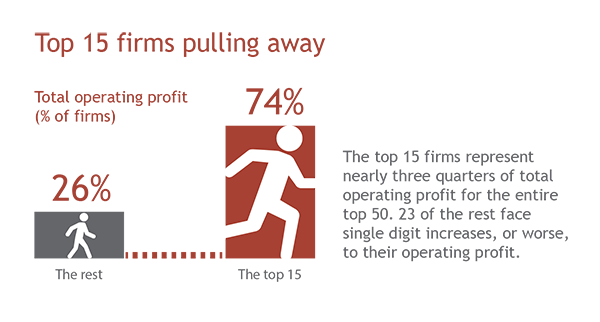 The top 15 law firms represent nearly three quarters of the total operating profit for the entire top 50 (74%), with 23 of the remaining 35 firms facing single-digit increases to their operating profit – or worse.

It’s concerning for the sector that a third (12) of the law firms outside the top 15 have experienced declines in their operating profit.

The market is looking increasingly prime for consolidation. Every firm in the Top 50 is an immensely profitable vehicle yet a number of the firms, particularly outside the top 10-20, have had declining profit margins for years. So while income may be rising the challenge of generating a sufficient return is becoming harder for some firms, who may feel the opportunity to merge with another firm will provide a way to reverse this decline.

Smith & Williamson’s most recent law survey identified that 25% of the respondents were considering mergers and acquisitions as the biggest opportunity for their firm over the next two to three years. However, 80% think that competitive pressure in the legal profession has increased over the past 12 months.

There is often a mistaken belief that mergers are simply for defensive purposes but that is not the case and two firms merging from a position of strength can often achieve more synergistic gains.

Mergers, particularly within professional services, can be a difficult thing to accomplish successfully; however, competition is only increasing. Law firms, like all businesses, need to stand out from the crowd and one way of doing that is through scale or specialisation.