Research conducted by The Andersons Centre concluded UK farming could see an 18% decline in profitability if we leave the EU without a deal. The research used Total Income from Farming (TIFF), a measure of profit of the UK farming industry as a whole. This is subject to no other changes to factors such as farming, weather and prices, which although hypothetical helps consider the primary impacts of Brexit. The analysis does not consider how farmers would respond to the changes.

The research examined the impact of both a Brexit deal and a no-deal on the output of each farming sector. The effects on major costs of both Brexit scenarios was then also measured. This assessment considered the potential impact of tariffs, non-tariff barriers and tariff rate quotas. Support levels to UK farming were kept constant in this analysis.

Under a Brexit deal scenario, a small decline in profitability (3%) is projected; however, under a no-deal, an 18% decline is projected. 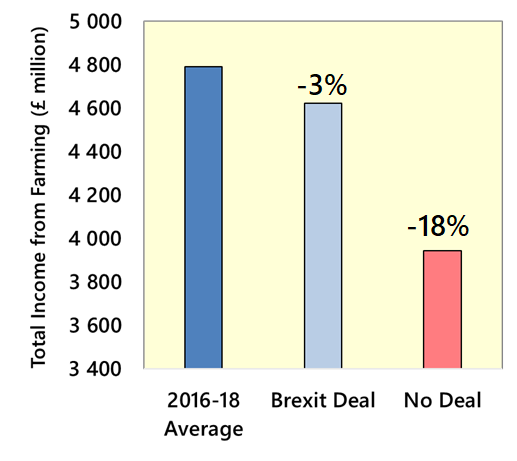 There is significant variation observed within the overall estimate. For instance, where output is concerned, substantial declines are calculated for sheep meat (-31%), while output for cereals, milk and beef production are also down. Some increases are projected for horticulture and intensive livestock (pigs and poultry) provided there is sufficient labour available for undertaking operations.

Some decreases of costs are likely for inputs which would be affected by the introduction of lower UK import tariffs under a no-deal scenario. Examples here include animal feed, fertiliser and some plant protection products. However, other inputs such as veterinary costs are thought likely to rise as it is anticipated that there would be an increase in demand for veterinary staff to assist with border inspection operations.

An 18% decline in profitability would equate to a hit to UK farming generally of almost £850 million. With many farms already struggling to break-even, the viability of many farming businesses will be challenged. Unsurprisingly, grazing livestock farms (particularly sheep) would be the most exposed given the output declines mentioned above, but a no-deal would also result in a significant downturn for dairy farming in Northern Ireland, given its reliance on having its milk processed in the Republic of Ireland.

If the UK leaves the EU without a deal then farming overall might become tougher for a few years. The pace of structural change within the industry may accelerate, but those businesses in the best health will find a way to prosper even under such conditions. An old Chinese saying that says when the winds of change blow, some build a shelter, and other build windmills rings true here. Opportunities will be present by those eager to find or create them.

Smith & Williamson comment: Farm businesses need to have an understanding of how any changes post Brexit could impact on their cash flow and profits. Detailed budgets and cash flow forecasts can help a business to plan for any peaks or troughs in funding and assist with decision making. The tax rules on losses, hobby farming and farmers averaging should also be factored into cash flow and timing decisions to ensure the most tax efficient outcomes are achieved.

Smith & Williamson is one of the leading tax and accountancy advisers to landed estates and Farms. As a trusted adviser to our clients, we have helped many generations of families to achieve their personal and financial goals.

Charity investors can give themselves a better chance of achieving stable, long-term returns by avoiding a number of common mistakes.

How comparable are investment manager returns?

In spite of the best efforts of the regulator, and warnings that ‘past performance is no guide to the future’, trustees continue to put recent strong performance front and centre when picking an investment manager.

Jargon busting: what you really need to know

The investment industry is fond of jargon. Deciphering this alphabet soup of acronyms can give the impression that investing is complex and impenetrable

The latest tax update and VAT round up for the week