The most profitable dairy farms per litre of milk produced are the top seasonal calvers but the UK market is dominated by all year round calving – time for a rethink?

A recent report by the Agricultural and Horticultural Development Board (AHDB) entitled Delivering a more competitive industry through optimal dairy systems recommends that UK dairy farmers should focus on one of two systems:

Contrary to perception, AYR is still by far the most common system followed by British dairy farmers. According to AHDB, 81% practise AYR compared with just 4% spring and 8% autumn block calving, raising the question of ‘how many have actually made a conscious strategic decision to follow an AYR calving system or have they just ‘fallen’ into it?’

The AHDB is encouraging producers to choose a system that “enables them to compete, matches their market segment, complements their mind- set and takes account of any on-farm limitations or opportunities”.

The table below shows the results for the five-year average to 2015/16 for the different systems, separating them into the average and the top 25% of producers for each. 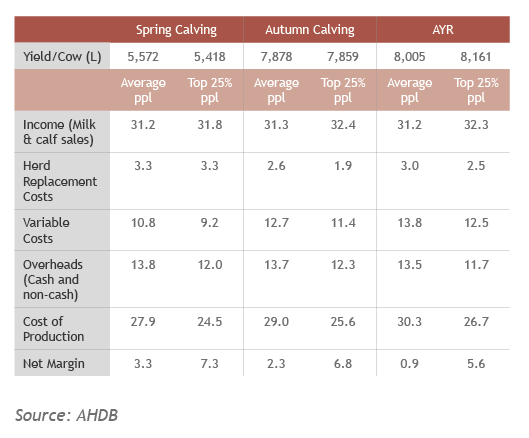 This demonstrates that, for each system, there is a large difference between the average producer and the top 25%. It also shows that the best AYR producers can achieve a margin comparable with the block calving systems, but it is crucial that the decision to operate an AYR system is consciously made rather than just by default.

Overall, the most profitable farms per litre of milk produced (and per cow) are the top seasonal calvers, primarily spring calvers. However, seasonal calving does require a higher level of farm and herd management to retain tight calving dates, meaning good fertility, effective oestrus observation and strict replacement policies to name but three management procedures that have to be robust.

Furthermore, the greatest opportunity of seasonal calving patterns is to reduce overheads by substantial levels, such as staff and labour. This is not so evident from the table but, at the extremes, the highest and lowest cost producers are likely to have overheads that differ by potentially 10ppl.

Yet, to successfully run a herd in a block calving pattern requires discipline and tight management practices to prevent calving patterns from slipping and to keep costs as low as possible. AYR calving herds tend to yield more milk per cow than seasonally calving herds. Whilst higher yields mean there is more milk to sell per cow, there are also higher costs including concentrate feed per litre of milk.

For example, the John Nix Pocketbook for Farm Management for 2018 quotes feed requirements of 0.325kg per litre of milk for an average all-year-round herd, costing 6.5p per litre. Meanwhile, the spring calving herd is fed 0.15kg per litre of concentrate feed, costing 2.7ppl. Whilst the milk yield for the spring calving herd is 2,750 litres less per cow, the costs have remained far lower.

If you are a dairy farmer, have you made a conscious decision regarding your calving system? Those partway between the two are often in the worse situation, with high costs of production and low yields.

Labour costs (and labour availability post- Brexit) are key considerations, particularly for larger dairy producers, practicalities such as availability and cost of appropriate seasonal labour should be considered.

Where profitability is changing, either through changing output prices or input costs, consideration should be given to the resulting movements in the tax position.

For example, changing profitability might result in the ability to make use of two or even five year farmers’ averaging, or planning for the efficient use of losses arising for tax purposes, reducing tax liabilities and payments on account due.

Understanding the immediate impact of the changes being implemented might result in, e.g. tax payments on account needing to be reviewed, if perhaps there is a short-term reduction in profits during a period of change, preserving cash for investment in the business.