Scale-up belief in government support may begin trending upwards, despite uncertainty, as measures taken over the past year start to take effect.

Belief in government support reached a low point in March, coinciding with the triggering of Article 50, with only four out of ten respondents believing that the government was acting in their best interests.

Just a year after the Referendum, the belief that policy is supportive of private enterprise has begun trending upwards with nearly 50% of respondents believing they have the support of Theresa May. 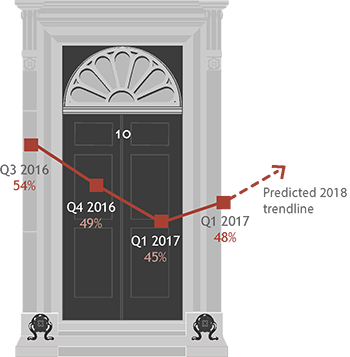 Since the beginning of 2017, several initiatives have been launched to transform the start-up ecosystem into a scale-up one, by encouraging (and supporting) high-growth businesses. The appointment of a scale-up champion, a government minister who will promote their value, was supplemented with the development of a taskforce.

Crucially, other government departments are buying in to the benefits that scale-up businesses can bring.

Philip Hammond announced the launch of the Patient Capital Review at the Autumn Statement 2016, and a major consultation on financing growth in innovative firms began in August 2017. These changes are indicative of a government intent on promoting scale-up business and not just paying lip service to the idea.

How can the government help?

Britain needs to take its thriving entrepreneurial community seriously and encourage growth and yet, despite the huge push to entice individuals to set up a business, there has been a failure to assist those businesses to grow.

As a result, many start-ups have been left searching for information on what to do when they reach a certain level. If the UK wants to benefit from the scale-up revolution it needs to improve the failure rate of start-ups and better support those with high potential.

One area the government should begin to look at is the funding of Local Enterprise Partnerships (LEPs), which are currently under-funded and are dependent on assistance from private bodies.

Adequate funding for LEPs could see them develop local ecosystems, bringing material change to the local, and wider UK, economy. Better central funding should come with accountability, which can ensure that the taxpayer retains bang for their buck from the LEPs.

Do you expect the UK economy to improve in the next 12 months? 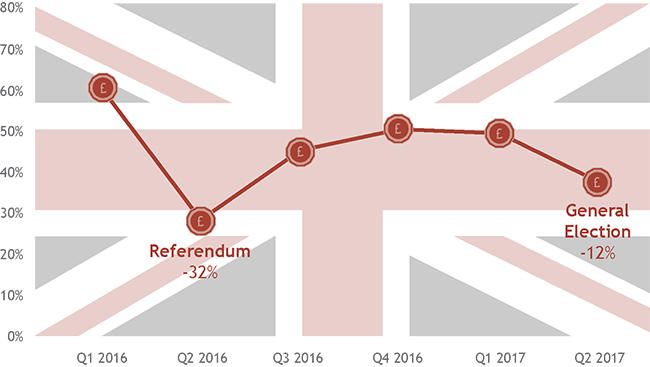 Although suffering a massive 30 point drop following the vote to leave the EU, respondents’ belief that the economy would improve had largely recovered prior to the General Election, with over half predicting growth in the UK economy over the coming year.

The anti-big business rhetoric on the campaign trail shone a positive light on the smaller/medium end of the business community, as both parties looked to promote the sector as crucial to the success of the UK economy.

Confidence in the economy, from an SME perspective, could hopefully continue to trend upwards in the next 6-12 months, providing no further unexpected shocks occur.

The vote to leave the EU, and subsequent General Election, has had a polarising effect. It has created widespread uncertainty and yet, at the same time, the ideal environment for Britain’s small and medium-sized businesses to develop: positive public perception, a supportive government and an economic need to find ways to encourage growth.