The Chancellor of the Exchequer certainly seemed at ease giving this year’s Budget address to the House of Commons, buoyed by recent strength in the UK economy even as Brexit worries swirled in the background. There were relatively few surprises overall. While there were some socially important elements, such as the extra funding for social care and efforts to help small companies facing hikes in business rates, these are not really enough to move the dial at the macroeconomic level.

Economic growth following the EU referendum has been surprisingly strong – the major contributor to this is the backdrop of a stronger global economy, as recently highlighted by the Bank of England, rather than the actions of Government. There is no denying that surprising resilience from the UK consumer has also been a driver. Since most consumers are also voters, the Chancellor needed to avoid anything that could seriously affect sentiment, which he largely did in this Budget.

While the Chancellor tried to capitalise on the near-term upgrade to the GDP forecast, you can see in the chart below this is less of a universal improvement and more a re-sequencing of expectations from the Office for Budget Responsibility (OBR). In November’s Autumn Statement, the forecast was for a sharp fall in growth this year, followed by a steady improvement over the next few years. In this latest Budget, while growth for 2017 has been significantly upgraded from 1.4% to 2.0%, it has been downgraded in the years following, re-converging in 2021. This is perhaps not as positive as the Chancellor’s demeanour suggested, and forecasts are still somewhat behind those produced ahead of the EU Referendum. 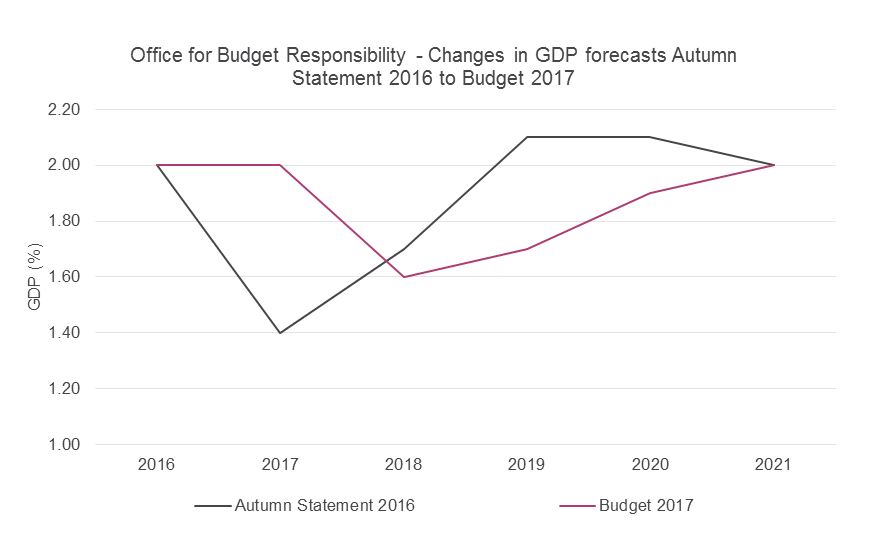 There was some better news on the Government deficit side, where stronger-than-expected tax revenue expectations meant the cyclically adjusted deficit for this year was positively revised from 3.3% to 2.6% of GDP, though it is expected to temporarily increase to 2.9% next year. Following the EU Referendum, the Government abandoned the aim of eliminating the deficit by 2019/20, instead replacing it with a target 2% deficit. By today’s figures, the forecast is to be well ahead of that, with a deficit of 0.9% by the end of the parliament (in 2020).

The full impact of Brexit is still to be seen, and both the OBR and the Chancellor seem to be taking a (small-c) conservative approach. Forecasts still have pressures coming through in the years ahead, particularly on economic growth, and the Chancellor is trying to keep some of the powder dry from recent gains. What the Government considers its ‘fiscal headroom’ – and everyone else calls a ‘Brexit war chest’ – of 1.1% for the deficit target versus forecast in 2019/20 could be used for some fresh stimulus, if needed.

From an investment strategy point of view, the strength of the UK and global economies have been a boon for equities recently. From here, equities no longer look cheap, and there are a number of risks on the horizon – for example, business optimism remains weak, and recent consumption seems to have been fuelled by unsustainable borrowing. That said, there are few clear catalysts that could be expected to trigger corrections in the short-term. Our current strategy favours cautious exposure in client portfolios that we think can participate in further upside market momentum but we would expect to limit the downside should markets fall sharply.