The rise of the Smart Grid presents landowners and farmers with an opportunity to create new revenue, despite the drop in subsidies supporting renewable energy technologies.

The UK is legally bound to provide 15% of its energy needs (including 30% of its electricity, 12% of its heat, and 10% of its transport fuel) from renewable sources by 2020. This is regardless of its relationship with the EU as this is a commitment from the Paris Climate Accord, an agreement within the United Nations Framework Convention on Climate Change.

In 2015, renewable energy accounted for just nine percent of the energy consumed in the UK, led by renewable electricity. 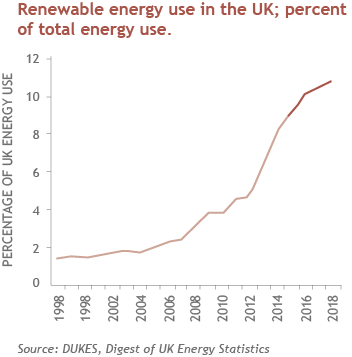 Whilst landowners and businesses with established renewable energy projects have guaranteed support via the respective incentive schemes, (primarily the Renewable Heat Incentive and Feed in Tariffs), the support available for new installations is considerably less than when they were first introduced.

…but potentially profitable opportunities are emerging

This doesn’t mean that there will be no new installations; indeed, capital and fitting costs have also more than halved, suggesting manufacturers were enjoying a slice of the generous subsidy, although cost of production has reduced also. However, it does mean that more careful calculations are necessary, to ensure there is a business case before investing. In some situations, renewable energy technologies are viable without subsidy at all, particularly where the energy produced can be used within the business itself.

The future of renewables in their current structure is limited by the divorce between supply (windy or sunny days) and demand (half time on a winter evening). However, a change is happening and the advent of Smart Grid technology means that some devices are able to use electricity to recharge when supply exceeds demand. Electric cars are expected to become commonplace in the coming years, and these might be a typical example.

The storage of electricity, which has hitherto been prohibitively expensive, is becoming viable, specifically to serve peak demand, again facilitated by Smart Grids.

There can be various tax considerations to be made when evaluating renewables projects, depending on its scale and nature – renewables projects may have implications for a wide range of taxes from VAT to inheritance tax and professional advice should be sought before entering any agreements or embarking on a renewables project committing to a scheme.

Can investors gain trust in Truss?

As expected, Liz Truss is the choice of the Conservative membership and takes residence in 10 Downing Street with immediate effect. The question now is whether she will follow through on the promises she made in her campaign, or whether the realities of government will bite.

This article is aimed at pointing out the issues to breeders and owners rather than giving detailed advice on the convoluted rules relating to the taxation of people who are resident in the UK but do not have a tax domicile here – colloquially known as Resident Non Doms (RNDs).