While Theresa May can’t guarantee the support of the small business community, she can be reassured that its confidence in its own growth is the highest in four years, according to the latest Enterprise Index results from Smith & Williamson, the accountancy, tax and investment management group.

The Enterprise Index, a quarterly barometer testing the views of over 200 business leaders and entrepreneurs, reveals that 85% of entrepreneurs and small business owners are planning for growth and 80% are optimistic about their own prospects over the next 12 months. Crucially, they are nearly 30% more positive about their own growth than at the end of 2016, the highest point since mid-2013. 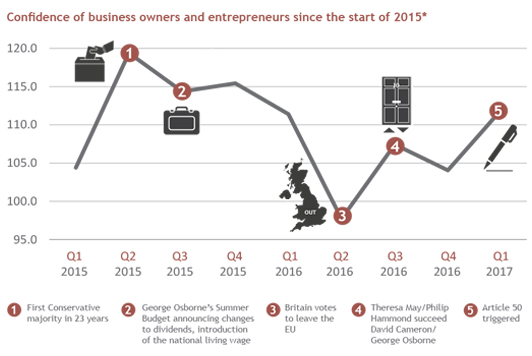 However, the Tories can’t assume they have locked-in widespread support from small businesses and entrepreneurs. The Enterprise Index highlighted this as the fourth consecutive quarter where SMEs perception of support offered by the government has declined, with less than half (45%) expressing positive opinions toward government policy.

There is no doubt that small businesses continue to have gripes about the government policy. However, the Prime Minister seems to have caught them in a buoyant mood. It’s possible that, by triggering Article 50, entrepreneurs at least feel some progress is being made. In addition, the high profile climb-down on self-employed National Insurance Contributions (NICs) appears to be evidence of a government that is listening.

Notwithstanding this, there has been a growing mistrust in the government due to a credibility gap between what the government is saying and what it is actually doing. Within the past few months they have delivered an industrial strategy green paper, a scale-up champion and a scale-up taskforce but this has yet to deliver meaningful change. However, at the same time, the government has slashed the tax free dividend allowance by 60%, causing problems for many. 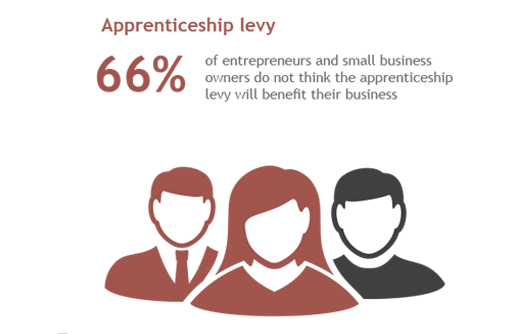 The Apprenticeship Levy is a great idea in theory, but less than half (34%) of our respondents believe it is likely to be valuable in practice. The administrative necessities could mean that most small businesses will not participate, leading to disappointment over the number of new apprentices. It is therefore a concern that the levy could just become a stealth tax on larger businesses.

SMEs taking Brexit in their stride

The Enterprise Index highlights the fact that 54% of respondents believe that the uncertainty associated with the triggering of Article 50 negatively affected their business. However, this does not appear to have negated any plans for growth, with nearly two thirds (65%) looking to increase headcount over the next three months [an 11 point rise from the last quarter].

The negotiation of a Brexit deal will have many layers, with the ramifications from any individual part having potentially widespread consequences. While the current mood is buoyant, SMEs need to be aware that changes to our relationship with the EU could affect them on a day-to-day basis. Recent growth decelerators, such as stagnating real wage growth and lower consumer spending, could be a portent of things to come.

Confidence is important, but it is vital that SMEs keep a close eye on the changing landscape and guard against any irrational exuberance.

Over two thirds of respondents (68%) believe that the fall in sterling since the referendum result from last year had negatively affected their business. However, this hasn’t affected their outlook with 56% suggesting the financial health of trading partners is improving, a 21% quarter on quarter. Additionally, 73% of respondents expected that turnover would increase remained, maintaining the confidence from Q4 2016 (72%). 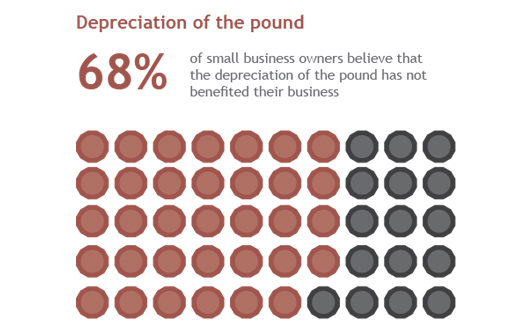 While the fall in sterling has had larger consequences, such as a rise in inflation over the past few months, this hasn’t yet hit SMEs. Many of our respondents have benefited from the positive position it has left their trading partners in. Continued consumer spending and a relatively benign global economy seem to have created an aura of positivity.