A look back over macroeconomic and market events for the period ending 17/02/17. UK inflation and retail sales disappointed, whilst the reverse was true in the US. Markets remain in wait-and-see mode, with Europe and US PMI data the only expected releases of note this week.

Headline inflation in the UK moved closer to target whilst retail sales were a significant disappointment. CPI increased 0.2% to 1.8% year on year in January, though this was below expectations for 1.9%. Inflation is expected to surge over the next 12 months, driven by base effects, the recent commodity rally and of course the drop in sterling, before falling back towards target.

Although many news articles will talk about this headline inflation, we believe it is more important in investment terms to look through this – as it is the core, underlying inflation that Central banks are more likely to focus on. On this score, core CPI inflation actually remained unchanged at 1.6% year on year despite expectations for an increase to 1.8%, suggesting a more subdued outlook. This, in turn, has prompted UK breakeven inflation – market implied inflation expectations – to fall from recent highs, though it is still elevated.

Amid rising prices, retail sales fell again in January, down -0.3% month on month after a -2.1% fall in December, and disappointing forecasts for a rebound to 0.9%. Retail sales figures are notoriously volatile, so we don’t read too much into this data point in isolation. However, consumers can be especially fickle, and rising prices coming after a credit splurge at the end of 2016 may mean consumers are becoming more frugal, which may have knock-on effects to economic activity.

Chinese credit growth showed signs of slowing as authorities have started to tighten monetary conditions. Although new bank lending in January was 2.13 trillion renminbi, far ahead of December’s 0.99 trillion renminbi, after adjusting for seasonal factors this was the slowest rate of loan growth for ten years.

Total credit growth, which adds in non-bank lending but excludes government borrowing, hit a fresh all-time high of 3.33 trillion renminbi (approximately US$480 billion), but again came as the overall rate of growth continued to slow. Authorities have been tightening monetary policy at the fringe, using non-core monetary policy tools principally to increase the inter-bank borrowing rate and reduce liquidity, although the ‘main’ instruments of the benchmark deposit and lending rates are unchanged.

The authorities are clearly wary about continued debt growth and the risk of asset bubbles building, though the recent changes have generally had only a marginal effect so far. Credit growth is slowing, but from a high level.

Another week of relatively subdued movement in the markets. Equities and bonds were marginally up, with sterling slightly weaker, but generally markets seem to be in a wait-and-see mode. 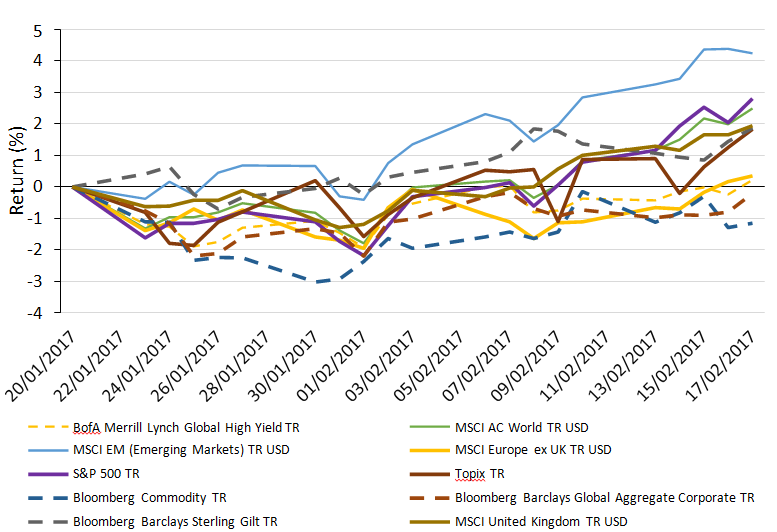 Equities – It was another quiet week for developed market equities. The US was the best performer, with the S&P 500 returning 1.6%. The UK and continental Europe lagged behind with returns of 0.8% and 0.9% respectively. In Asia, Japan’s TOPIX index fell -0.1% whilst the Hang Seng in Hong Kong rose 2.0%.

Commodities – There was little change in oil, with Brent Crude last seen at US$55.81 per barrel, and it was a similar story for gold, which finished at US$1,234.80 per ounce. Copper was slightly softer on the week, slipping to US$2.70 per lb.

Currencies – Sterling was a little weaker. By the end of the week it had fallen to €1.17, ¥140. It was also weaker versus the US dollar, finishing at US$1.24, but the movement was more muted after some fresh weakness in the greenback on Friday.

A few potentially informative data points this week, particularly the latest PMI figures from the Eurozone and the US which are due out on Tuesday. Forecasts suggest Eurozone manufacturing PMI will have slipped from 55.2 to 55.0 whilst Services PMI is expected to remain unchanged at 53.7. Coincidentally, the US Manufacturing PMI is forecast to do the exact opposite and improve from 55.0 to 55.2, whilst the Services PMI is expected to be up 0.1 to 55.7. Greece could also feature in the news as the Eurozone Finance Ministers meet on Monday – it had been hoped agreement on the latest bailout tranche could be agreed ahead of this meeting, though it now seems that will be missed as disagreements between the International Monetary Fund and EU officials rumble on. Although this will not push Greece back into acute crisis, it does risk the problem becoming a campaign issue at the upcoming elections in France and the Netherlands. Elsewhere:

Monday: The UK’s Confederation of British Industry will report the latest Industrial Trends Orders data in the morning, whilst in the afternoon the Eurozone Consumer Confidence reading is out.

Tuesday: Early in the morning, Japan’s All Industry Activity Index is reported, whilst the main data of the day will come from the PMI numbers out of the US and Eurozone.

Wednesday: Chinese house prices are reported early in the morning, an area which continues to boom and is clearly a focus for the government. Later in the morning, German business sentiment from the Ifo surveys is reported, and the first revisions to UK GDP growth in the fourth quarter are released. In the afternoon, US existing home sales data come out.

Thursday: German consumer confidence numbers are out first thing, then in the afternoon the Chicago Fed National Activity Index is updated.

Friday: UK mortgage approvals are reported in the morning, and in the afternoon US new home sales data are reported to see us out for the week.