The economic downgrades from the Office for Budget Responsibility (OBR) follow similar moves from the International Monetary Fund and Bank of England earlier in the year, but were nonetheless rather sobering – they come at a time when growth in many other parts of the world are being upgraded. GDP growth was quite significantly revised down, not just for the next couple of years but for the whole forecasting period (see chart below), driven by sharp cuts in expectations for business investment and housing spending. We feel there was also a sour note for the wage outlook. We have discussed frequently the need for higher real wages – that is, wages after the effects of inflation – which are currently negative, and an important driver of economic growth that has been identified by both the Government and the Bank of England recently. A key factor for this is productivity growth, with higher productivity supporting higher wages. The OBR’s latest downgrades show a fall in productivity for this year from 1.6% to 0, and then only subdued growth out to 2021. As a result, private sector real wage growth will likely come at the cost of profit margin, a negative factor for domestic UK companies. 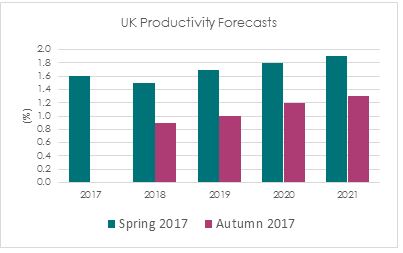 The Budget wasn’t universally bad and the Chancellor was able to move some money around. Public sector net debt-to-GDP is expected to peak this year at 86.5%, falling to 79.1% by 2022-23. The deficit is also expected to continue contracting, from 2.4% of GDP this year to 1.3% by 2021-22. Importantly, this is below the 2.0% target the Chancellor has set, providing some ‘headroom’ equivalent to about £15 billion by 2021-22, which is considered by many to be a Brexit war chest to provide a fiscal boost later if needed, though this headroom is now lower than forecast in the spring.

There were a number of giveaways this time, including stamp-duty breaks for first time house buyers, an increase to the living wage, further support to promote housebuilders and a push on technology investment. There was an announced injection of £2.8 billion into NHS England over the next three years, as well as a £10 billion capital investment for hospitals. Notably, whilst there was no explicit announcement of a pay increase for nurses, the Chancellor made clear there would be more money to fund this if the independent pay review body recommended it. This potentially paves the way for a broader ending of the effective public sector pay cap, a step that could help with the real wage challenge facing the UK.

There were few surprises from the Chancellor, who had little room to manoeuvre and was held back from any bold moves that could antagonise parts of the wider Conservative party. The deteriorating economic outlook is a cause for concern and is something we have highlighted previously. However, investors should remember that the UK economy is not the same as the UK stock market, where around 70% of large-cap revenues are derived from overseas, and the global backdrop remains supportive for companies.