A look back over macroeconomic and market events for the week ending 24/03/17. There was surprising strength in European economic data, while the Trump reflation trade appeared to fade as the White House failed to repeal Obamacare. There is a lot of medium-impact data due out this week, with Eurozone inflation and ‘Article 50’ in the UK likely to be highlights.

The Eurozone surprised markets with ongoing strength in key economic forecasts. Purchasing Manager Index (PMI) readings surged ahead, defying forecasts for a slight fall – Manufacturing PMI increased from 55.4 to 56.3 (55.3 expected) and Services PMI increased from 55.5 to 56.5 (55.3 expected), levels not seen since early 2011. This signals a particularly strong growth outlook (a reading of 50 is the tipping point from contraction/expansion). Increases to the New Orders and Backlogs of Work measures highlighted the uptick in recent demand – in response, employment has also accelerated, with the pace of job creation in the Services sector the fastest since 2007.

Consumer confidence has also picked up, improving from -6.2 to -5.0 (-5.7 expected) continuing a steadily improving trend. There are clearly signs that the economic recovery in the Eurozone has some legs to it, even as markets discount political risks, although as usual the figures are dominated by France and Germany. This will no doubt feed in to broader discussions about the appropriateness of ultra-loose monetary policy from the European Central Bank. For the moment, core inflation remains subdued just below 1%, even as headline inflation hits the 2% target. But these are backward looking measures, and if economic growth continues in line with what the leading indicators are suggesting, that could start to change.

Stronger data in the UK

There were also surprises in the UK with retail sales and inflation readings coming in much stronger than expected after disappointments in the last couple of months. Headline inflation smashed through the 2%, up 0.5% to 2.3% year on year ahead of forecasts for 2.1%. We’ve talked in the past about the importance of looking through volatile headline inflation to the core inflation measure, and this reading, too, surged from 1.6% to 2.0%, ahead of 1.7% expected. Retail sales also rebounded after several months of poor readings – February retail sales grew at 3.7% year on year, up from a downwardly-revised 1.0% in January and ahead of forecasts for 2.6%. Stripping out Auto sales, retail sales were up 4.1% from 2.1% (3.2% expected).

Although we would not read much into one month of positive surprise, it is enough to put paid to a deteriorating trend that was starting to form. It is also worth remembering that the Bank of England has been highlighting some of these measures recently, and has also indicated it wouldn’t take much of an improvement in the data to bring forward the potential timing of the next UK interest rate hike.

Markets were in risk-off mode last week. Equities suffered and investors bought in to the perceived safety of government bonds and gold.

Equities – Most major equity indices were negative on the week. In the US, the S&P 500 lost -1.4% and in Japan the TOPIX index was also down -1.4%. Closer to home, the UK equity market fell -1.0% (as measured by the MSCI United Kingdom index) and across the channel, Continental Europe (based on the MSCI Europe ex-UK) was off -0.3% for the week. Against that backdrop, Hong Kong just about managed a positive return, up 0.2%.

Commodities – Oil remained subdued, though Brent Crude managed to stay in the low 50s range all week, finishing at $50.80/barrel. Gold strengthened to $1,248.20/ounce, while copper was fairly unchanged at $2.62/lb.

Currencies – The Japanese yen strengthened during the week, with the US dollar generally weaker. Sterling finished at $1.25, €1.15 ad ¥139. 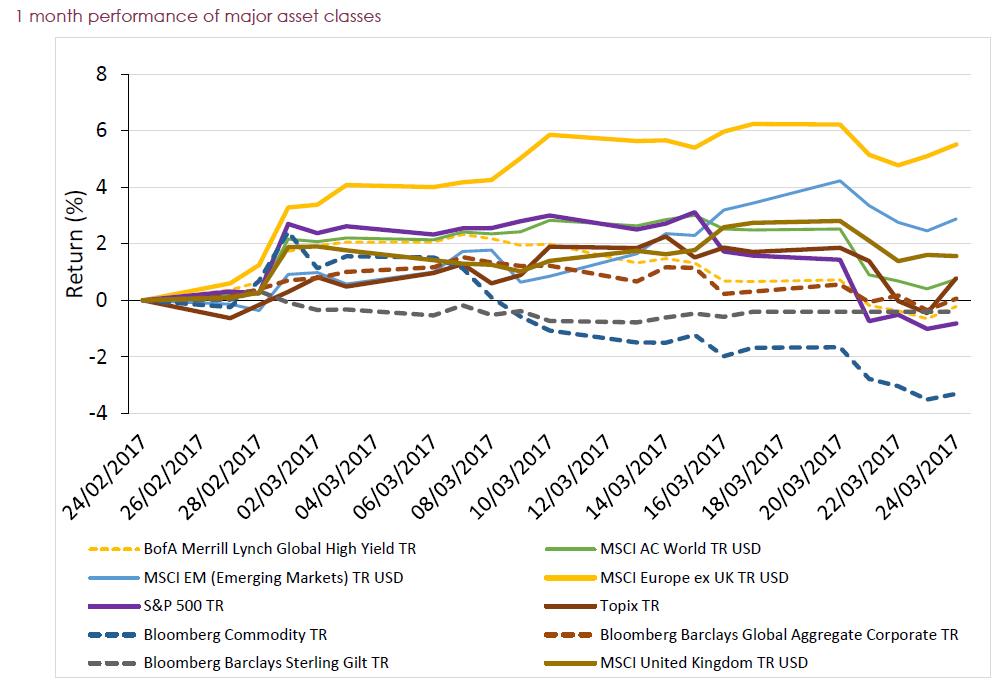 Another reasonably busy week data-wise, albeit with no one major release to focus on. However, a non-data event of particular note will be on Wednesday, with the UK Government expected to finally trigger Article 50, formally beginning the process of leaving the EU. On Thursday, Eurozone Business Confidence readings are out, which are expected to have improved from 0.82 to 0.84, and we’ll be watching closely to see if they align with the recent strong data we’ve been seeing out of Europe. On Friday, Eurozone inflation is expected to have slipped back from 2.0% to 1.8% year on year, and before that we also have PMI data from China to look forward to, followed by US personal income and expenditure data. Elsewhere:

Monday: German Ifo business sentiment survey results are released in the morning. In the afternoon, the Dallas Fed Manufacturing Index is updated.

Tuesday: US Wholesale Inventory levels come out early in the afternoon, with Home Prices and Consumer Confidence shortly after. Late into the evening, Japanese retail sales numbers are out.

Wednesday: UK house prices are released first thing in the morning, followed by the latest Consumer Credit data from the Bank of England along with mortgages data. In the afternoon, US Pending Home Sales data and Oil storage levels are published. Late in the evening, UK Consumer Confidence from Gfk will be reported.

Thursday: After the Eurozone Business Confidence numbers in the morning, US revisions to the final quarter GDP and PCE inflation measures are reported, along with official corporate profits readings. Late in the evening, Japan reports on inflation, household spending and industrial production.

Friday: Following the official Chinese PMI numbers for the Manufacturing and Non-Manufacturing sectors, German Retail Sales and Unemployment data are released, followed by the inflation readings covered above. In the afternoon, US PCE price levels are updated, while Personal Income is expected to remain steady at 0.4% mom and Personal Spending is expected to remain at 0.2% mom.