The European Central Bank (ECB) cut interest rates further and announced an increase in its quantitative easing (QE) programme, but this proved disappointing for markets which had expected more – especially after weeks of rhetoric from key Central bank figures which were interpreted as being very dovish.

On interest rates, the deposit rate was cut 10bps further into negative territory to -0.30% (the refi and marginal lending rates were left unchanged), which contrasted with many market participants who were anticipating a deeper cut to -0.40%. ECB President Mario Draghi also extended the QE programme until ‘at least’ March 2017, and broadened the scope to include regional debt – essentially municipal bonds – as well as sovereign debt. Draghi also confirmed that the ECB would continue to reinvest principal payments from maturing securities held in the programme, which was largely assumed but a useful clarification nevertheless.

This was seen by the markets as a step in the right direction. However, hopes that the rate of purchase would be increased from €60 billion a month, or that corporate bonds would be included in the list of eligible assets were clearly misplaced. The big reveal was met with a fairly flat response, and the press conference failed to inspire any hope that more was on the way – leading the ECB Vice President to blame the markets for “getting it wrong in forming their expectations”. Some are labelling this the “Draghi Disappointment” but regardless of the market reaction, this still represents further monetary policy divergence, as the ECB continues to loosen policy just as the Fed seems all-but-certain to start hiking next week. Speaking of which…

US rate rise set for December

Strong non-farm payroll figures from the US on Friday effectively dispelled any remaining doubt over US interest rates being hiked in December. 211,000 jobs were added in November (beating expectations of 200,000) whilst the already-strong October figures were revised up further. Other labour market data were also supportive, with the participation rate marginally improved and earnings up 2.3% year on year. The market is currently implying an 80% chance of a rate rise at the Federal Open Market Committee (FOMC) meeting, which probably underestimates the true projections. Other data highlighted the global slowdown however, as the US trade deficit widened. This has been put down to economic weakness outside the US and the strength of the dollar. 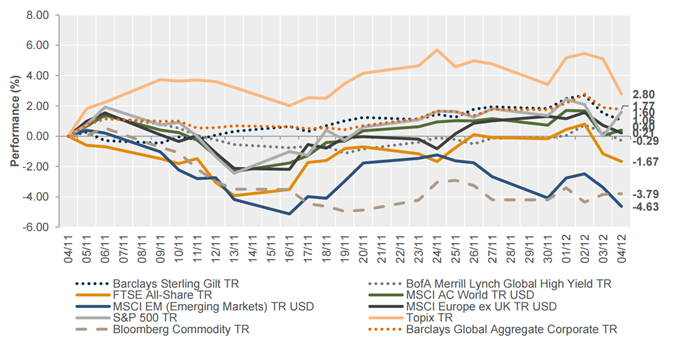 Equities – Across Europe equites were lower on the week. The FTSE All-Share fell -1.7% and Eurozone equities, as measured by the EuroStoxx 50, were down -3.6%. US equities were flat on the week after rebounding on the back of the latest non-farm payroll numbers. In the Far East, Japan joined the weakening theme as the Topix fell -1.3%, whilst the Hang Seng gained +0.7%.

Bonds – With monetary policy back in focus, and disappointment for the doves in Europe coinciding with hawk-supportive data in the US, it is little surprise that the sovereign bonds came under pressure. German ten-year bunds were 23 bps wider at 0.69%, UK ten-year gilts were 11 bps wider at 1.93% whilst ten-year US treasuries were 5 bps wider at 2.27%.

Commodities – Oil weakened through the week as expectations for any OPEC action waned, with Brent crude finishing at US$43 per barrel. Copper was little changed overall at US$2.07 per pound, but gold strengthened through to the week to finish at US$1,084.50 an ounce.

Currencies – The euro surged on Thursday, appreciating 2.70% against the US dollar and 2.22% versus sterling by the end of the week. The Japanese yen was the key faller over the period, down 0.81% against sterling. The US dollar was relatively uneventful in its own right, weakening 0.44% against sterling.

Following a very busy period last week, we now have something of a breather with the only notable events being Chinese trade data on Tuesday and the Bank of England’s Monetary Policy Committee (MPC) meeting on Wednesday – although no action is expected. Heading into the Christmas season, and after the ECB action and non-farm payroll results last week, markets are mostly now looking ahead to next week’s FOMC meeting.

Monday – Japan provides its leading economic indicator index first thing in the morning, before the final Q3 GDP reading last thing at night – which would confirm or deny whether Japan was officially in a recession. Germany also reports industrial production figures.

Tuesday – China will report on its international trade, which has been deteriorating significantly on both the import and export fronts over the last few months. Expectations are for further falls, but at a slower rate than in October (exports expected to fall -5% from -6.9% previously, imports to fall -12.6% from -18.8%). Later in the UK Industrial and Manufacturing production numbers are out, then US JOLTS Job Openings are released in the afternoon.

Thursday – UK balance of trade numbers come out in the morning, then at midday the Bank of England MPC decision is released along with the minutes from the meeting. No action is expected, but the discussions from the meeting may provide some useful insight. In the afternoon US import and export prices are released.

Friday – Chinese Foreign Direct Investment is reported first thing, with UK consumer inflation expectations and construction output later in the morning. In the afternoon, the week wraps up with US produce prices and retails sales figures, followed by the Michigan Consumer Sentiment update to see us into the weekend.