A look back over macroeconomic events for the fortnight ending 06/05/2016. US economic data deteriorated as the Federal Reserve (Fed) and Bank of Japan sat on their hands. GDP reporting was disappointing for the US but Europe proved surprisingly strong. As equities slipped, bonds firmed back up and some strength returned to gold. This week the Bank of England Monetary Policy Committee meets and will release its inflation report and the UK reports industrial production numbers, but it’s otherwise fairly quiet.

US economic data takes a downturn

Recent economic data out of the US has turned gloomy over the last couple of weeks. US non-farm payrolls at the end of the fortnight were a stinging miss, with 160,000 jobs added in April compared to expectations of 202,000 (and 208,000 jobs added in March). The participation rate slipped back down 0.2% to 62.8%, although unemployment was unchanged at 5%. However, average hourly earnings actually ticked up 0.3% month on month from 0.2% in March as expected, although productivity fell.

Durable goods were also a disappointment, only growing at 0.8% month on month in March – falling well short of expectations for 1.8% growth, but still an improvement on the -3.1% fall in February. Further disappointment came from the ISM Manufacturing PMI which confirmed the same signal as the earlier Markit PMI measure, with a worse than expected slip from 51.8 to 50.8 (a modest fall to 51.4 was forecast). Official statistics also showed that personal income improved more than expected in March, up 0.4% month on month from 0.1% (0.3% was expected). But as we’ve discussed before, it doesn’t look like the consumer is going to be the saviour here, as personal spending unexpectedly slipped from 0.2% to 0.1% month on month – suggesting people are saving their money rather than spending it. The only positive data came from the ISM Non-Manufacturing PMI number, which improved more than expected from 54.5 to 55.7 (54.7 was expected).

No action from the Fed or Bank of Japan

The US Federal Reserve and Bank of Japan let their monetary policy meetings pass without action. This was largely expected of the Fed, which released a statement that effectively said nothing and with no press conference or forecast updates. Overall, the Fed meeting was something of a non-event, and now there is a lull until the next meeting on 14-15 June, adding to what is already set to be an interesting month.

Conversely markets had been expecting some action from the Bank of Japan after the recent yen strength and with inflation still very weak, the lack of any announcement pushed the yen up further as the equity market fell.

GDP updates from around the world

In line with the weaker numbers, US GDP fell short of expectations – growing at an annualised 0.5% quarter on quarter in Q1. This was a slowdown from 1.4% in the final quarter of 2015 and worse than expectations for a fall to 0.7%, though it should be noted that this estimate is subject to revision.

In the UK, GDP growth slowed in line with expectations from 0.6% to 0.4% quarter on quarter (not annualised), leaving the year-on-year number unchanged at 2.1%. Against these, Eurozone GDP actually picked up with quarter-on-quarter growth increasing from 0.3% to 0.6% (forecast was for 0.4%) putting the year-on-year number at 1.6% (unchanged from Q4 and ahead of 1.4% expected).

The fortnight’s other events

Generally equities were weaker over the fortnight, with sovereign bonds reversing earlier weakness. The biggest effect was in Japan, where the Bank of Japan’s lack of action drove the yen up and Japanese equities down. 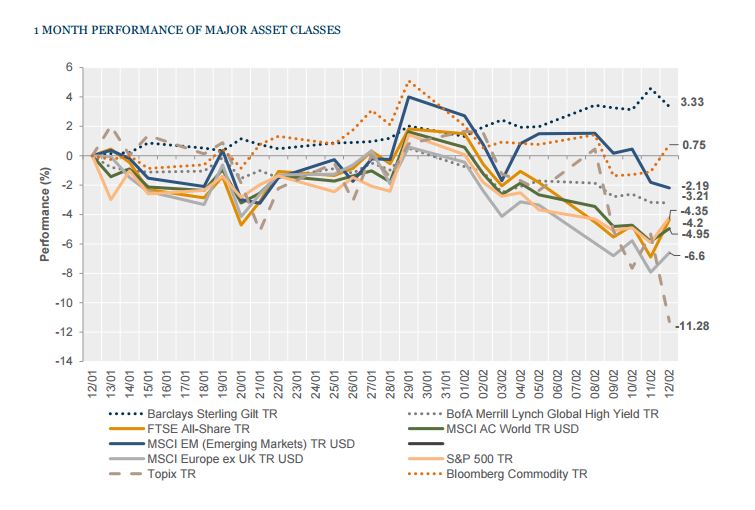 Equities – equity markets were softer overall. In the UK the FTSE All-Share was down -2.6%, while in the US the S&P 500 was off -1.7%. Things were tougher in the Far East, with Japanese equities falling -7.8% as measured by the Topix index after a market holiday midweek, and in Hong Kong the Hang Seng index was down -6.3%.

Commodities – oil fell last week after a rally towards the end of the previous week, leaving it broadly unchanged for the fortnight – still in the mid-forties for Brent, and ending the week at US$45.37 a barrel. Copper was softer over the period, ending at US$2.15 per lb, whilst gold strengthened to end the fortnight just shy of the US$1,300 mark at $1,292.90 an ounce.

Currencies – sterling was unchanged over the fortnight at US$1.44, having strengthened last week after weakening the week before. Sterling strengthened slightly against the euro, to end at €1.26, whilst the yen surged to end ¥155 to the pound.

After the action of the last couple of weeks, there are only a couple of events of note this week. The Bank of England’s Monetary Policy Committee meeting concludes on Thursday, and although it is extraordinarily unlikely there will be any change to monetary policy, the quarterly inflation report will be released at the same time – which could provide further insight into the policy outlook. There are also a series of releases from China, with Chinese Foreign Direct Investment and Inflation figures out overnight Tuesday, and Fixed Asset Investment, Industrial Production and Retail Sales out on Saturday. In the UK, Industrial and Manufacturing Production for March will be reported on Wednesday, with forecasts suggesting year-on-year industrial production will have fallen, but the rate will have moderated from -0.5% to -0.4%, whilst Manufacturing falls are forecast to have accelerated from -1.8% to -1.9%. Elsewhere:

Japanese consumer confidence comes out early on Monday morning, followed by German Factory Orders, then in the afternoon the US Federal Reserve’s Labor Market Conditions Index is updated.

The minutes from the Bank of Japan Monetary Policy meeting then come out overnight, as does the first batch of Chinese data (see above). Later in the morning the UK’s balance of trade for March is reported, and then in the after the US reports on Wholesale Inventories. These are followed by UK manufacturing and industrial production numbers on Wednesday morning, with little else to report for the day.

Ahead of the Bank of England meeting results being released at midday, on Thursday morning Eurozone Industrial Production figures are expected to show an improvement from 0.8% to 1.1% year-on-year in March. In the afternoon, US Import and Export Prices are reported (expected to be unchanged at 0.2% and 0.0% month on month respectively), followed by JOLTs Job Openings.

Finishing the week, the only potential interest in the morning is the first possible revision to Eurozone GDP. After lunch the US reports retail sales, which are forecast to have rebounded from a -0.4% month-on-month fall in March to 0.5% growth in April. The US will also update PPI inflation, expected to have improved from -0.1% month-on-month deflation in March to slight inflation in April (0.1% and 0.3% for Core and headline PPI respectively). Finally, the Michigan Consumer Sentiment Survey results are published at 3pm, forecast to have improved from 89 to 91.