A look back over macroeconomic events for the week ending 15/04/2016. Despite slowing GDP, broader Chinese economic data improved ahead of expectations, as data in the US deteriorated after a recent strong run. This week we have the European Central Bank (ECB) meeting to look forward to, and a slew of PMI data on Friday.

Trade data were also supportive – exports were 11.5% up year on year and imports moderated their falls to -7.6%, both ahead of expectations. PPI inflation also improved from -4.9% to -4.3%. At the recent National People’s Congress the Chinese authorities announced fresh fiscal stimulus measures, which may explain some of the recent improvements, though the house view remains that this comes at the cost of harsher consequences further down the road.

Disappointment from the US

Moving from the world’s second largest economy to its largest, numbers out of the US were more of a disappointment after some recent strengthening. Retail sales fell month on month in March, down -0.3% from flat in February. Markets had hoped for modest growth of 0.1%, making it harder to see where a sustained economic recovery could come from. Industrial production also disappointed, down -2.0% year on year in March from -1.8% in February, whilst business inventories contracted -0.1% month on month, as expected.

Inflation was a little more subdued, with headline inflation falling 0.1% to 0.9% year on year (1.1% expected). Core inflation was similarly down 0.1%, but still running ahead of the 2% target at 2.2% – although this is not the preferred measure used by the Federal Reserve (Fed), which is PCE inflation. The only positive data were export prices, which appeared to stabilise – they were flat month on month in March from a -0.5% fall last month and forecasts for another fall of -0.2%.

Some confidence re-entered risk markets last week, as equities pushed ahead and sterling had a modest bounce. 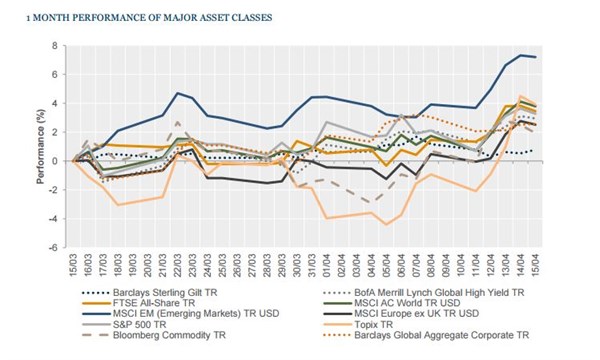 Equities – markets in the Far East led the charge, with the Topix index of Japanese equities up 5.6%, and the Hang Seng index of equities in Hong Kong returned 4.6%. Western regions were also up, but to a lesser extent – in the UK the FTSE All-Share gained 2.0%, and in continental Europe the FTSE Europe ex-UK returned 1.9%. The US was the laggard, but the S&P 500 still gained 1.6% over the week.

Commodities – oil range-traded last week with Brent remaining in the low US$40s, closing out the week at US$43.10. Copper was mildly stronger, finishing at US$2.15 per lb and gold was slightly softer by the end of the week, last seen at US$1,233 an ounce.

Currencies – sterling reversed some of its recent weakness, up 1.67% against the euro, 0.57% against the US dollar and 1.02% against the Japanese yen. The euro was generally weaker overall.

There is a reasonable amount to watch this week, the main interest coming at the end of the week. On Thursday the ECB meeting concludes, and although no further action is expected after the aggressive stimulus announced at the last meeting (along with improving inflation numbers), the press conference will be closely watched for details of the Central bank’s thinking. Ahead of that, on Thursday morning UK retail sales numbers are out, and are forecast to have accelerated from 3.8% to 4.4%. On Friday, we have theApril PMI numbers out of the US, Japan and the Eurozone. Japan’s manufacturing PMI fell below 50 in February, indicating contraction, and markets will be hoping for an improvement there. Markets are also looking for a slight improvement in the Eurozone figures, with 51.8 forecast for Manufacturing PMI and 53.3 for Services PMI. US manufacturing was last reported at 51.5. Elsewhere:

Overnight on Monday Chinese house prices are reported, then later in the afternoon the US NAHB Housing Market Index comes out. On Tuesday morning Eurozone construction output is reported, followed by the ZEW economic surveys for the Eurozone. Markets are looking for an improvement, particularly in the German Economic Sentiment (forecast 8 from 4.3) and Current Conditions (51.0 from 50.7) numbers. In the afternoon, housing starts and building permits data are released in the US.

As we reach midweek, Japan reports on its exports and balance of trade overnight. In the morning we have UK unemployment (forecast to remain at 5.1%) and average earnings, expected to have increased from 2.1% to 2.3% in February, inclusive of bonuses. In the afternoon, US existing home sales are out as well as oil and gasoline storage levels.

After UK retail sales and the ECB output on Thursday morning, the latest US Philadelphia Fed Manufacturing index results are released (expected to have slowed from 12.4 to 8.5). These are followed later in the afternoon by Eurozone Consumer Confidence, which is expected to remain at -9.7.

To finish the week, on Friday PMI readings are out for US and Japanese manufacturing, along with both services and PMI for the Eurozone.