Mixed messages from the US

The US released a slew of mid-level economic data, which was generally positive but difficult to get too excited about. Durable goods orders beat expectations by coming in flat month on month in August (-1.4% was expected), but at the same time the previous bumper reading of 4.4% was revised down to 3.6%, taking some of the shine off. Services PMI increased to 51.9 with the composite PMI measure up 0.5 to 52.0, and consumer confidence also picked up from 101.8 to 104.1, defying expectations of a fall to 99.0.

The Federal Reserve’s (Fed’s) preferred inflation measures also ticked up, with Core PCE inflation increasing 0.1% to 1.7% year on year (the less-useful headline PCE reading increasing 0.2% to 1.0%). Personal income rose 0.2% month on month (in line with expectations, and down from 0.4%), but spending was flat (from 0.4% and forecasts for 0.1%). Given this lacklustre backdrop, we think it is difficult to build a compelling case for strong economic growth in the US economy, which is needed to justify current valuations. Despite this, the lack of overt negative news whilst inflation continues to tick up could keep the course and rhetoric from the US Federal Reserve unchanged.

OPEC countries agree to a cut in production

The Organisation of Petroleum Exporting Countries (OPEC) surprised markets by agreeing to cut production. At a meeting in Algiers, the cartel announced their intention to cut production for the first time since the global financial crisis. This is likely to involve a cut of 240,000-740,000 barrels per day from the 33 million produced at the moment. Although the surprise caused the price of oil to rally, it is difficult to get too enthusiastic about the agreement, since details won’t be agreed until the November meeting.

Whilst any sort of agreement is clearly a step in the right direction, even if there is agreement again at the next meeting (before implementation) there is still the issue of compliance, which tends to be very mixed across the loose collection of companies. This is, after all, little more than the classic prisoner’s dilemma – whilst it is in each agent’s interests to cut production, there’s a larger incentive not to cut (with the others cutting, thereby selling more oil at a higher price). But if no one cuts, everyone in the cartel loses.

Yellen and Draghi both grilled by politicians

Both Federal Reserve Chairwoman Janet Yellen and European Central Bank President Mario Draghi found themselves being grilled in front of politicians this week. Testifying before the US House Committee on Financial Services, ostensibly on regulatory matters, Chairwoman Yellen was instead on the receiving end of accusations from the Republican Party about political connections between some committee members and Hillary Clinton, which Yellen denied knowledge of.

On the other side of the Atlantic, Draghi reportedly received a tough reception in Germany before a closed-door session of the Bundestag, particularly over whether the Central bank was preparing to bail out Deutsche Bank (which Draghi denied) after another difficult week for the bank. Despite the absence of any real economic discussion, this ties in with one of our major themes for 2016 – increased political involvement and interference of Central banks.

The German IFO business surveys showed further improvement across the board. The Business Climate Index increased from 106.3 to 109.5 (106.4 forecast) with surprises on both the current conditions and expectations sub-indices. This was echoed in the wider Eurozone Business Confidence survey, which increased from a reading of 0.03 to 0.45 in September (0.10 was forecast).

Japan continued to languish in deflation, with headline inflation slipping from -0.4% to -0.5% year on year in August, and core inflation also at -0.5%. However, industrial production recovered in August, from -4.2% to 4.6%

Oil rallied mid-week following the OPEC announcement, but otherwise it was a relatively quiet week for the markets. 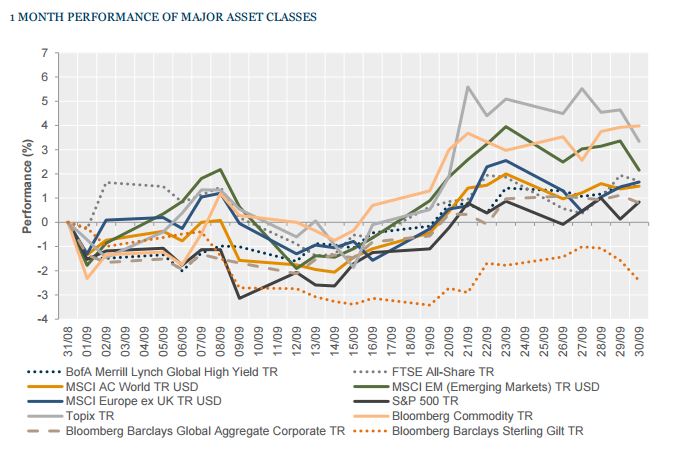 Equities – Equity markets were broadly range-bound last week, with generally very little to show for the week. In the UK, the FTSE All-Share was down -0.2% overall for the week, and in the US the S&P 500 gained 0.2%. In Europe – despite a lot of newsflow around the banking system – the FTSE Europe ex-UK ended the week down just -0.7%. In the far East, the Japanese Topix fell -2.0% whilst in Hong Kong the Hang Seng index shed -1.7%.

Commodities – Oil was the biggest mover on the week after the OPEC announcement, pushing Brent Crude back above US$50 by the end of the week, at US$50.19 a barrel. Copper continued to add back incremental strength, ending the week at US$2.20 per lb. Gold was weaker during the week, closing out at US$1,313 an ounce.

Currencies – The yen had a volatile weak, strengthening initially, then softening, then rallying before finally ending the week somewhat down against other major currencies. Sterling ended the week at US$1.30, €1.15 and ¥132.

We’re back around to US Non-Farm Payrolls on Friday, and although we are some way off from the next meaningful Fed meeting, the results could clearly have an impact on markets that are currently searching for direction. Forecasts are for 170,000 jobs added, from the 151,000 miss last time (after two huge beats). We’ll also get UK Manufacturing PMI on Monday, expected to soften from 53.3 to 52.1. Also on Monday, the equivalent US measure from ISM is expected to be slightly stronger, from 49.4 to 50.3. Wednesday will see the UK Services PMI (forecast 52.0 from 52.9) and US ISM Non-Manufacturing PMI (53 expected from 51.4 previously). Elsewhere:

Overnight on Monday, the Japanese surveys of manufacturing are reported, before UK and US manufacturing PMI numbers are out. Japanese consumer confidence is released early on Tuesday (UK time), followed later in the morning by UK Construction PMI.

As we enter midweek, we get Services and Non-Manufacturing PMI for the UK and US respectively, as well as Eurozone retail sales for August and US factory orders. German factory orders and construction PMI are produced on Thursday morning, then US initial jobless claims are out in the afternoon.

We end the week with a busy day. Overnight on Friday the Japanese leading economic indicator index is reported, then later in the morning UK industrial and manufacturing production numbers for August are out. Along with US non-farm payrolls, average US hourly earnings and the participation rate will also be out.