A look back over macroeconomic events for the week ending 28/10/2016. Strong US GDP numbers for the third quarter led a week of generally improving economic data in the US and Europe, spooking sovereign bonds. It’s a busy week this week, with plenty to get our teeth into. We have Non-Farm Payrolls on Friday and three key Central bank meetings – the US Federal Reserve, Bank of Japan and Bank of England.

The US market gives support to the Fed’s hawks

The strength of the latest US GDP growth numbers was a highlight of the week. Annualised growth in the third quarter rose to an impressive 2.9%, a strong rebound from the 1.4% seen in the second quarter and significantly ahead of the 2.5% expected. Arguably this surprising growth was down to lower quality drivers, mainly inventory building and government spending, which are not particularly sustainable. Export growth also played a part, although consumption and investment contributors were more subdued. However, growth is still growth and the reading will provide further support for the hawks at the Federal Reserve (Fed).

PMI readings were also positive. The Services PMI reading from Markit increased from 52.4 to 54.8 for October and the Composite reading, which includes both services and manufacturing, was up from 52.3 to 54.9. Other US data were less supportive – durable goods orders unexpectedly contracted in September, falling -0.1% month on month (from 0.3% growth in August and expectations for 0.1% in September). Consumer confidence also slipped from 103.5 to 98.6 (forecast was for 101).

All in all this points to a general strengthening of the economic data, though we continue to have questions over the sustainability of the recovery whilst markets look expensive and potentially priced to perfection. Any strengthening of the dollar from here could be a threat to the US economy.

There were also encouraging data coming out of the Eurozone, with both Services and Manufacturing PMI readings beating expectations in October. Services PMI increased from 52.2 to 53.5 (52.4 expected) whilst Manufacturing PMI rose from 52.6 to 53.3 (an unchanged 52.6 was expected).

The Business Climate survey from Ifo in Germany increased from 109.5 to 110.5 with both Current Conditions and the Expectations indices above expected levels. It was a similar story for the Business Confidence measure across the Eurozone compiled by the European Commission, which increased from 0.44 to 0.55 (forecast was 0.44).

Global sovereign bond yields backed up again whilst other markets were relatively unmoved on the week. Equities were weaker, but with limited magnitude. 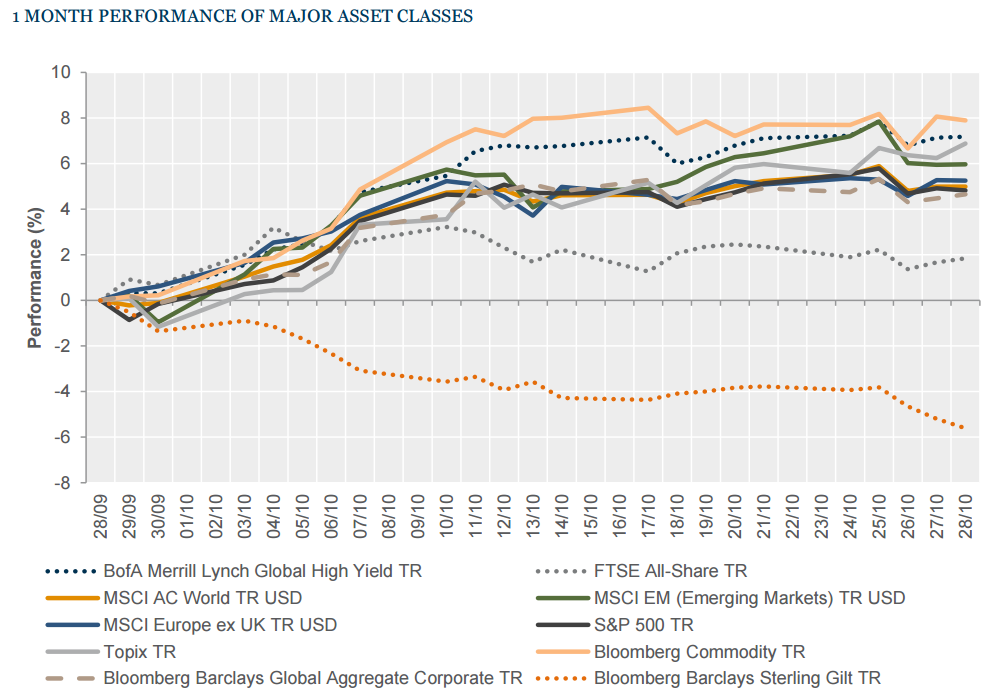 Oil was weaker on the week as some of the enthusiasm for a broad cut in supply started to wane. Brent Crude dipped below US$50 at the end of the week, to finish at US$49.25 per barrel. Copper was marginally stronger at US$2.19 per lb and gold was slightly stronger to finish at US$1,275.50.

Sterling was relatively stable against the US dollar ($1.22) and the Japanese yen (¥128) but fell against the euro (€1.11), which bounced back against major currencies after recent weakness.

We have a lot of activity this week, with three major Central banks having their monetary policy meetings. The Bank of Japan meets on Tuesday (UK time), the Fed on Wednesday and the Bank of England on Thursday. No changes are expected, with the US meeting coming close to the presidential elections and without a scheduled press conference. In the UK the Bank of England (BoE) is likely to digest the effect of the latest round of stimulus, and the latest Inflation Report will be released. There is likely to be plenty to talk about as the market tries to discern the current thinking of Central bankers. On top of that, it’s back to Non-Farm Payrolls on Friday, where the market is expecting the usual 175,000 figure. On Monday, Eurozone GDP for the third quarter will also be released. After the strong performances in the UK and US, it will be interesting to see what comes out, with the market forecasting no change at 1.6% year on year (0.3% quarter on quarter). Elsewhere:

On Wednesday Japan reports Consumer Confidence and the Bank of Japan’s latest quarterly outlook early doors. Later in the morning UK Construction PMI is out, and then in the evening the US Federal Reserve will announce the outcome of its monetary policy meeting.

Caixin Services PMI for China comes out overnight, followed in the morning by UK Services PMI just ahead of the Bank of England’s Super Thursday release. In the afternoon the US releases further employment data, such as unit labour costs and non-farm productivity, along with ISM non-manufacturing PMI and factory orders as the warm up to Friday’s action.

After a quiet morning, the main event on Friday is US Non-Farm Payrolls. Along with the headline number, we will also see the usual associated data of average hourly earnings, participation rate and unemployment rate, rounding off a busy week of data.